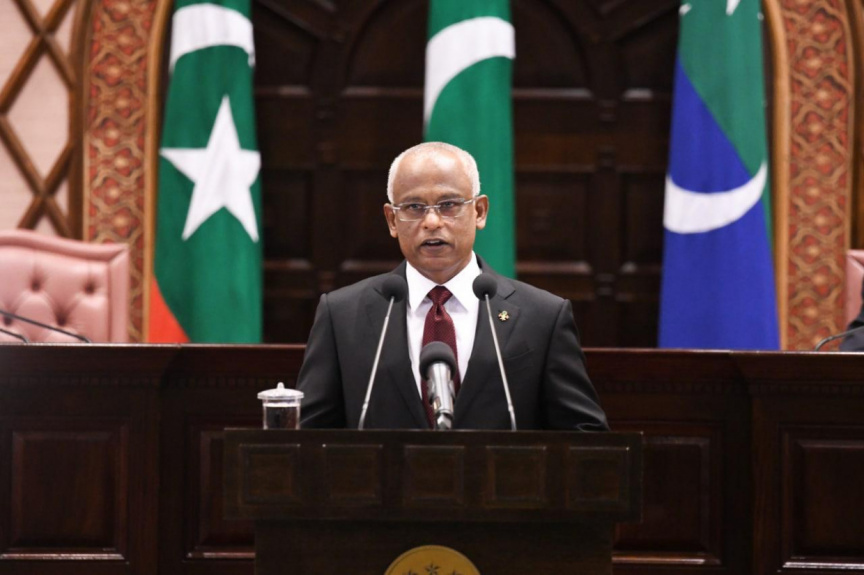 President Ibrahim Mohamed Solih in the inaugural speech to the Parliament today highlighted on a number of key issues and points.

The President, addressing the parliament touched on key issues such as vaccination against COVID-19, foreign currency supply, and the recovery of the economy in the aftermath of COVID-19 as well as the importance of the fishing industry, before announcing that for the first time, a non-resident ambassador to Palestine will be appointed within this year.

The President said that it could take around two years to fully rebuild the economy in light of COVID-19. The estimate was based on the current speed of the work to rebuild the economy. He noted that the Maldives was among the nations most heavily impacted due to the pandemic and that the economy was in an abysmal situation.

"The government has now commenced work to return to the prior condition, by diversifying the economy, increasing the economic activity by a lot," said President Solih.

The President said that the government was focusing on extending the income of the tourism industry, in the efforts to recover the industry, to the North and South of the nation, before noting that lands were up for bid for tourism purposes from islands all across the nation.

President Solih also noted the development of human resources for the industry with the training of 1,200 employees as part of the efforts to broaden the economy. Work was underway to develop employees in areas such as ICT, construction, and tourism.

Fishing was the industry that had kept the pulse of the economy beating, during the pandemic, noted the President who added that important work to develop the industry sustainably was now underway. This includes paving the way for other companies to enter the industry and revoking the exclusivity of the industry.  President Solih in his speech said that the capacities of the facilities such as the cold storage in Kooddoo and Kanduoiygiri and Felivaru were to be increased by 8,200 metric tons this year. This would lead to an increase of 62 percent in the purchasing capacity of MIFCO. The President also noted the cold storage facilities under development in Thinadhoo and Mulah.

President Solih in his speech also announced that he was aiming to appoint a non-resident ambassador to Palestine for the first time.

The purpose of the appointment was to increase foreign relations and more non-resident ambassadors were to be appointed for the same purpose, said the President.

President Solih stated that discussions were underway between the two governments to increase cooperation and relations between the two nations. The President reiterated the Maldivian government's commitment to stand alongside the Palestinian citizens.

The main focus of the Maldivian foreign policy was to ensure the safety and protection of the Maldives, said the President who added that it was also inclusive to protect the interests of the nation in all matters.

The President pointed to the difficulties faced in obtaining foreign currency during the pandemic which very much affected the economy and business.

To resolve this, the President noted that the central bank of the Maldives in 2020, had increased the supply of foreign currency to the markets through banks on three occasions.

"We are now working to change the policy so that the citizens have access to foreign currency without facing any shortages." said the President in his speech.

Vaccines are the way to go back to normal

The President in his speech implored the nation to receive vaccinations against the virus. He noted that the government had worked hard to protect the people and obtain vaccinations for the entire population, which was now guaranteed.

The President assured that everyone in the eligible population to receive vaccinations would receive one without a charge and that everyone getting inoculated was the way to return to normalcy.

"So, take this opportunity, I advise everyone to get vaccinated." said the President.

The Maldives commenced vaccinations against the virus on February 1. So far around 1,500 had received vaccines for the virus. President Solih was among the first to receive the vaccine.