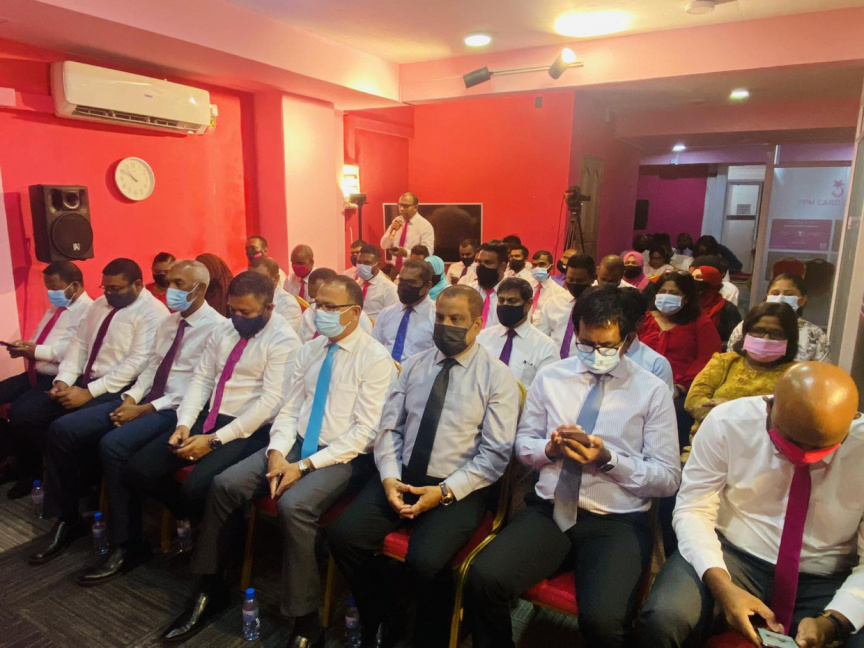 Yameen was sentenced to five years in prison for money laundering by the Criminal Court on November 28, 2019, after finding him guilty of manipulating the origin of and laundering USD 1 million in state funds for the lease of G. A. Vodamula for development as a tourist property.

The sentence was appealed by Yameen with the High Court, which concluded appeal hearings on September 1, 2020.

In a sentencing hearing held four months later on Thursday, January 21, the High Court decided to uphold the original sentence with the support of two out of three judges.

The PPM-PNC joint council convened for an emergency meeting on Saturday morning. Presenting a motion on behalf of the coalition’s leadership, PNC leader Abdul Raheem Abdulla said it is clear the judgement of the two judges who decided to support the original sentencing were issued with impartiality.

“We say this because the two judges failed to address all the arguments presented by the appellant, and because they failed to adhere to standards in Islamic Sharia to prove guilt, the Constitution, laws, precedence set by Supreme Court and High Court, decisions made by other countries in similar cases, or international conventions,” said Abdul Raheem, presenting the motion.

The motion also states that the opposition believes the reason why the case had dragged in the High Court for so long was due to government influence, and that the High Court had issued the verdict long after the deadlines for court verdicts set by the Judicial Service Commission had expired.

“In light of these reasons, this coalition believes the verdict issued by the High Court in support of the Criminal Court’s money laundering conviction against President Yameen was issued in contravention of judicial and legal standards and with government influence to fulfill a specific political purpose, we compile this motion to declare we do not accept this verdict and have decided to opt for direct action to call for President Yameen’s release,” reads the motion.

All council members who took part in the debate during the emergency meeting which lasted one-and-a-half hours spoke in support of the motion, and made serious allegations against High Court judges and senior government officials.

Council member, former parliamentarians Asma Rasheed said they need to engage is similar action as that taken by the opposition at the time in the wake of then-Criminal Court judge Abdulla Mohamed’s arrest, and that they are sure to achieve a speedy victory if all coalition members cooperate.

Council member Ibrahim Faisal alleged Yameen was being kept jailed at the instructions of the Indian’s government, and that he would not back down until Yameen is freed, even if he needs to storm K. Maafushi, which houses the prison where Yameen is serving his sentence.

“We, the people of Maldives, will return with Yameen, even if we need to storm Maafushi. We have the courage to get this done,” he said.

PPM deputy leader, former Housing Minister Dr. Mohamed Muizzu said that the conviction against Yameen is a national issue, linked with Maldives’ future. He said that the decision to televise the High Court’s sentencing hearing served to reveal the abuses being done to Yameen.

“Out of the three judges, the judgement of Judge Shaheed, what he said, served to reveal the government’s plans to the people. It has been revealed this preplanned verdict is unjust, nonsense, and that the abuses against him from the very beginning are instigated by the government to fulfil their agenda. We should not accept this verdict or wait patiently anymore,” he said.

Muizzu said that Maldives is no longer independent, but home to thousands of Indian soldiers.

“We should not accept this. Everyone needs to rise up and say ‘enough’ if we love our country. Freeing President Yameen is now a patriotic duty,” he said.