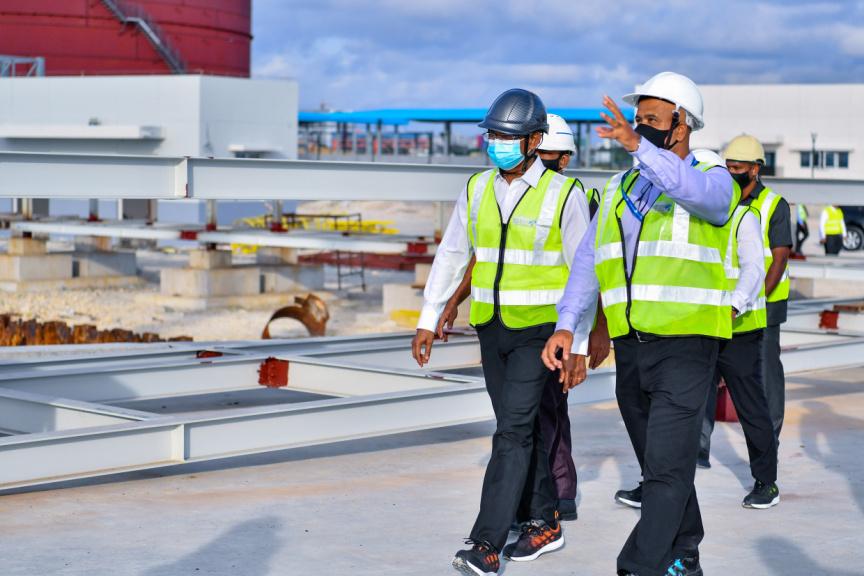 President Solih during a tour of the Velana International Airport. (Photo/President's Office)

President Ibrahim Mohamed Solih has visited the Velana International Airport (VIA) and sites of the development project underway at the airport.

During the tour, President Solih inspected the projects underway and the developments of these projects before inquiring about the latest information and updates on these projects.

The airport development project worth USD 1.2 billion was commenced during the previous administration of President Abdulla Yameen and includes projects such as a fuel farm, cargo terminal, VIP building and seaplane terminal at the main international hub of the Maldives. The new runway project of the VIA, carried out under this project, is now officially completed.

The fuel farm project will expand the fuel storage capacity of jet fuel from 15 million to 45 million liters, petrol to 100,000 litres, and diesel to a million liters, in addition to a modern fuel hydrant system which will replace fuel bowsers currently in operation.

During the visit, President Solih also expressed his deep appreciation and gratitude to Velana International Airport (VIA) staff, commending the exemplary services provided during the Covid-19 pandemic.

President Solih also met with senior officials of Maldives Airports Company Limited (MACL), Maldives Customs Service and Maldives Immigration, before inquiring about their operations. He discussed ways of enhancing the services further and resolving the challenges faced by their operations.

Speaking to them, President Solih said that he recognized the hard work they put in to ensure seamless operations, especially in preparation for the reopening of Maldivian borders. He also applauded the work done during tourism’s peak season, and denoted their accomplishments compared to the previous year.

The President’s visit also saw him inspect the progress of the fuel farm, cargo terminal, VIP building and seaplane terminal.