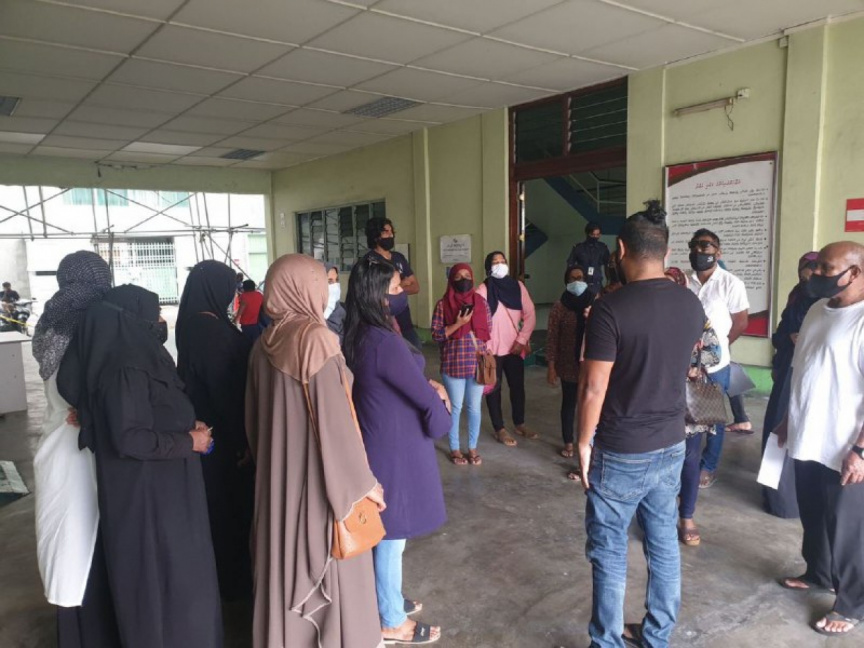 Applicants for the Hiyaa Housing Project queued outside ACC to submit letters over lack of opportunity to submit complaints over tentative lists. (Photo/Aanmuge Ekuveri Gulhun)

Applicants for the Hiyaa Housing Project have begun lodging cases with the Anti-Corruption Commission (ACC) over the expiration of the deadlines to submit complaints over tentative lists of tenants for categories except for H7, when the presidential committee established to review government housing projects released its guideline for assigning points for living condition assessment.

Aanmunge Ekuveri Gulhun, a non-profit which represents the interests of applicants for the Hiyaa Project, said in a press statement that releasing permanent lists of tenants without providing the opportunity to submit complaints will violate the rights to thousands of applicants.

The organization said that neither the committee, nor any relevant government institution, provided a response to the appeal to provide an opportunity to submit complaints before finalizing tenants.

The organization said it has therefore instructed members to begin submitting individual complaints to the ACC regarding the issue.

ACC has been receiving complaints regarding the issue since Wednesday.

Aanmuge Ekuveri Gulhun’s Interim President Midhuam Saud told Sun on that they have submitted 80 letters to ACC this Thursday alone, and expect to submit 200 letters within two days.

The organization has shared a draft letter for the convenience of members who wish to submit complaints.

The organization has also called on the committee and Planning Minister Mohamed Aslam to initiate talks to hear the concerns of applicants and continue with the process without encroaching on their rights.

The organization warned that problems which will arise from finalizing tenants without providing the fundamental right to submit complaints will be far more complex, difficult to resolve, and waste more time, and making a conscious decision to proceed with that course of action will therefore cause great harm to the people.

The government however announced it will release the guideline in question after tentative lists are released, citing that prior release of the guideline may affect the fairness of the process.

The committee has previously announced it is working on responding to complaints to the tentative lists and finalizing tenants by the end of December.