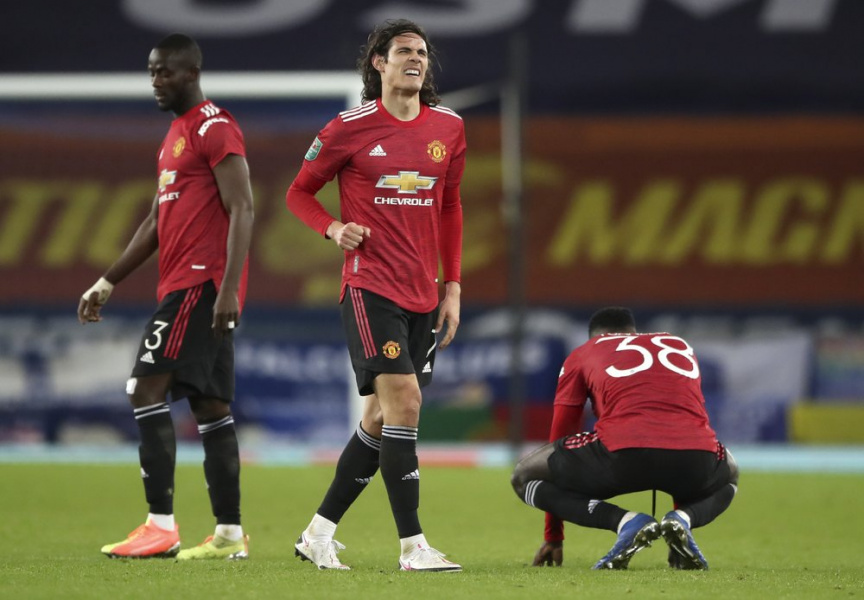 Edinson Cavani grabbed an opponent’s throat, then grabbed a crucial late goal to send Manchester United into the English League Cup semifinals and a rematch with fierce rival Manchester City.

Had VAR been in operation for the competition, the Uruguay striker mightn’t have been on the field to score United’s 88th-minute opener in the 2-0 win over Everton on Wednesday.

That’s because earlier in the half, Cavani was seen putting his right hand around the throat of Everton defender Yerry Mina and throwing the Colombian to the ground following a tussle between the South Americans. The incident apparently wasn’t spotted by match officials, who were unable to review it because no VAR is in place.

Anthony Martial then added a second goal in the sixth minute of stoppage time with virtually the last kick of the game at Goodison Park to seal United’s place in the one-legged semifinals, where the team was drawn at home to defending champion City in a repeat of the derby meeting from the same stage last season.

Tottenham’s kind reward for beating Stoke 3-1 in the other quarterfinal match on Wednesday was a home game against another second-tier opponent, Brentford, in the last four. The semifinals will take place in the week beginning Jan. 4, with the final at Wembley Stadium having been pushed back to April.

It was another brush with controversy for Cavani, who last week was charged with misconduct by the Football Association for using a Spanish term for Black people that he said was intended as an affectionate greeting.

“It’s two South Americans who have had a few battles before not long ago in the Copa America qualification,” Solskjaer said. “So no, no, no. It was a proper game of football.”

United reached the semifinals of three competitions last season — the League Cup, the FA Cup and the Europa League — and lost them all.

Now, Solskjaer’s side has the chance to end City’s three-year hold on the trophy and move in sight of its first piece of silverware under the Norwegian manager.

“It’s the worst game to lose, a semifinal,” Solskjaer said. “At least when you get to a final, you get that feeling, the build-up.

“We are going to do everything we can to get to the semifinals in a good state. Of course, we have many league games before that.”

The draw couldn’t have been kinder to former United manager Jose Mourinho, who moved within two wins of leading Tottenham to its first major trophy since 2008.

Gareth Bale, Ben Davies and Harry Kane scored for Spurs in a routine win at Stoke as Mourinho kept up his impressive record in the League Cup, which he won with Chelsea on three occasions and also while at United. It is a competition he targets — and has won it each time he reaches the semifinals.

“To win other trophies, you need to win more matches,” Mourinho said. “The FA Cup didn’t start for us. The Europa League, we are in the last 32. In the Premier League, I told you already what we are.”

Mourinho fielded a strong team at Stoke, which is seventh in the Championship, with Kane playing the full match amid a busy run of games in the Premier League.

Bale glanced in a cross from Harry Winks to give Tottenham the lead in the 22nd minute with his third goal since returning to the club in September for a second spell. The winger didn’t come out for the second half because of a calf injury.

Jordan Thompson equalized for Stoke in the 53rd in a rare sight of goal for the hosts following a counterattack but Davies put Tottenham back in front with a fierce low drive from 25 yards (meters).

Kane clinched victory in the 81st by running onto Moussa Sissoko’s pass and smashing a rising shot into the roof of the net.

“It’s a cold, wet and windy Wednesday night at Stoke so it was tough,” Winks said, repeating an oft-used cliché about Stoke stretching back to when the club was in the Premier League and hard to beat at home.

“But we applied ourselves well, we were aggressive and ready to compete.”