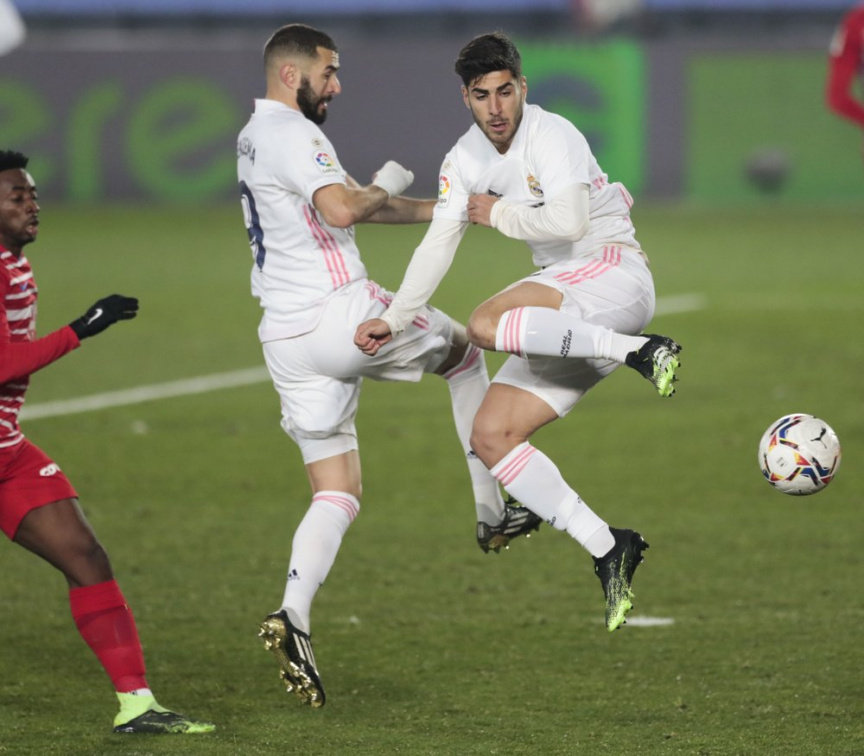 BARCELONA, Spain (AP) — A moment of inspired attacking by substitute Marco Asensio ensured Real Madrid stayed level on points with Spanish league leader Atlético Madrid in a title race that is shaping up as a crosstown contest.

Asensio came off the bench to help lead Madrid to a 2-0 win over Granada on Wednesday at its Alfredo Di Stéfano Stadium. Moments after hitting the post with a shot, Asensio set up Casemiro to finally break through Granada’s defense in the 57th minute.

Karim Benzema scored Madrid’s second goal in the game’s final seconds with Granada caught off balance while searching for an equalizer.

Madrid’s fifth league victory in a row kept it in second place behind Atlético on goal difference. They are both six points ahead of Real Sociedad and Villarreal. Fifth-place Barcelona is eight points back.

Atlético has more games in hand to play than the pursuing pack. Atlético has played 13 games, Barcelona 14, Madrid and Villarreal 15, and Sociedad 16.

“We have to be pleased with how we are playing,” said Madrid coach Zinedine Zidane, who has turned things around over the past three weeks following a poor start to the season.

“We are going to have to keep working hard and fighting on the field like we have been doing. Now we need to rest a little bit, spend some days with our families, and then get back to work.”

After compacting its playing calendar because of the impact of the coronavirus pandemic that shut down competition for several months, the Spanish league has only given its teams a few days of winter holidays, instead of the usual two weeks. The next round of games starts on Tuesday.

Granada’s well-disciplined defense anchored by Domingos Duarte frustrated Madrid’s attack throughout most of the game.

The visitors even enjoyed a good chance to stun Madrid moments after kickoff. Kenedy intercepted a pass by Madrid’s Raphael Varane and passed for Roberto Soldado to set up Antonio Puertas, only for his shot to sail high.

Sputtering in attack, Madrid lost forward Rodrygo Goes in the 38th when the 19-year-old Brazilian grabbed his right thigh and asked to be substituted. He had to be carried off on a stretcher.

On came Asensio, and the match swung in Madrid’s favor.

The creative midfielder, who has struggled to regain his form since undergoing knee surgery last year, showed why he was once considered a future star for Madrid and Spain’s national team.

Asensio went inches from scoring in the 55th when he used an audacious flick of his heel to bat a pass by Dani Carvajal on to the post.

The scare seemed to break Granada’s focus for the first time, and holes briefly appeared in its area. Seconds after Asensio had hit the woodwork, Granada goalkeeper Rui Silva had to repel back-to-back shots by Toni Kroos and Federico Valverde.

The goal came on Madrid’s next attack when Asensio dribbled to the endline and crossed the ball into the heart of the area for Casemiro to leap over his marker and head home.

Granada pressed for an equalizer, but its salvos of crosses into the box were well defended by Madrid.

Benzema then got his eighth goal of the season, making him the competition’s joint-top scorer with Villarreal striker Gerard Moreno.

Granada was in seventh place after its first loss in four rounds.

Eden Hazard was back on Madrid’s squad after his latest injury since joining the Spanish club kept him sidelined for six matches.

But he never left the bench.

Zidane said that he had opted to let his injury-struck star wait because “it was a difficult match.”

Alavés rallied for a 2-1 win over Eibar, which struck early thanks to a goal that Pedro León scored directly from a corner kick.

León curled his shot from the flag to inside the near post, where goalie Fernando Pacheco let the ball cross the line as it hit his body and found the net. The league credited León for the goal.

Celta Vigo’s winning run under new coach Eduardo Coudet was stopped at four after Getafe held it to a 1-1 draw in Madrid.

Iago Aspas converted a penalty for Celta in the 17th to cancel out Damian Suárez’s long-distance strike.

After losing just twice in its first eight matches, promoted Cádiz has now lost five out of seven.