Youngsters deliver for Arsenal as scrutiny shifts to Lampard 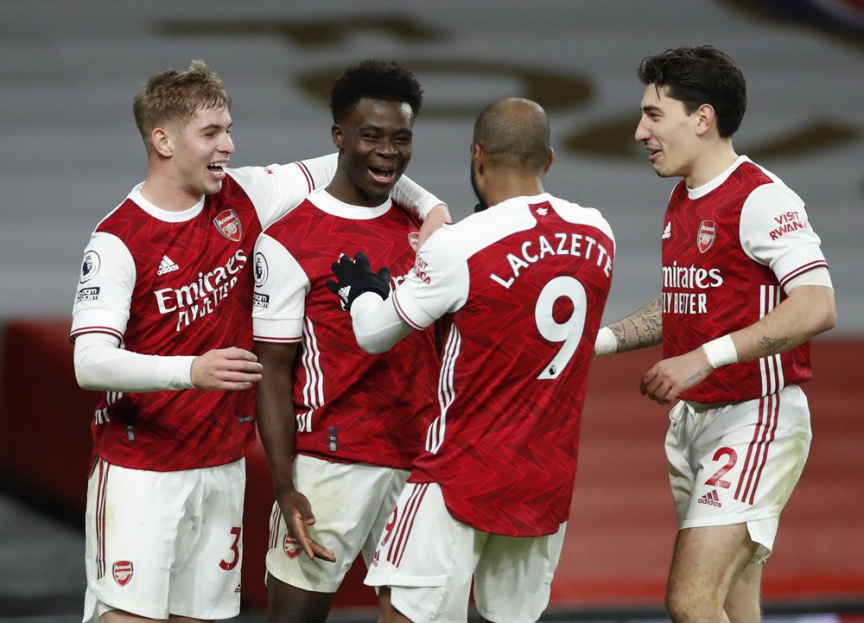 Arsenal's Bukayo Saka, second left, celebrates after scoring his sides 3rd goal of the game during their English Premier League soccer match between Arsenal and Chelsea at the Emirates stadium in London, Saturday, Dec. 26, 2020. (Andrew Boyers/ Pool via AP)

With his job increasingly on the line after an alarming start to the season, Mikel Arteta placed his faith in Arsenal’s kids to get the team out of trouble.

They delivered for their under-pressure manager.

Powered by two 19-year-olds — Gabriel Martinelli and Bukayo Saka — and a 20-year-old in Emile Smith Rowe making his first start in the Premier League this season, Arsenal produced its best performance in some time to beat Chelsea 3-1 and lift some of the gloom over Emirates Stadium on Saturday.

Arteta had billed the coming week, starting with the visit of Chelsea, as a “crucial” period that would determine which direction Arsenal was heading this season.

There was even some mischievous talk by Arsenal’s rivals and critics of Arteta’s team being in a relegation fight, given that it had lost five of the last seven league games — drawing the other two — to slip to 15th in the 20-club league.

A first league victory in nearly two months was vital, therefore, to boost Arsenal players’ fragile confidence — even if it only lifted them into 14th place.

“We needed that. We needed to give the fans something,” Arsenal defender Kieran Tierney said. “It’s something to build on.”

It took 90 minutes for the scrutiny that was hovering over Arteta to drift toward his Chelsea counterpart, Frank Lampard.

That’s three losses in the last four league games for Chelsea, which has dropped to seventh place and whose identity — and best lineup — is increasingly hard to decipher. Lampard oversaw a spending spree of nearly $300 million in the summer transfer window and knows the pressure is on to win trophies this season.

A penalty by Alexandre Lacazette, earned by a foul by Reece James on Tierney, and a stunning free kick by Granit Xhaka put Arsenal 2-0 ahead at halftime, before Smith Rowe and Saka combined for the latter to loft a shot — or was it a cross? — off the far post and into the net.

Playing only his third game in the Premier League, Rowe Smith — who spent the second half of last season on loan at second-tier Huddersfield — was a sensation in central midfield and Martinelli again impressed with his energy on the left wing after starting in place of Pierre-Emerick Aubameyang. Aside from scoring, Saka also earned the foul from which Xhaka converted the free kick.

Manchester United’s perfect away record is over, though it needed a late own-goal to end it.

Substitute Axel Tuanzebe unwittingly deflected a shot from Jamie Vardy into his own net in the 85th to gift Leicester a 2-2 draw at home to United. The result kept Leicester above United in the standings after they started the day in second and third place.

Bruno Fernandes set up Marcus Rashford for the opener, made a sloppy mistake that led to Harvey Barnes equalizing, then scored himself in the 79th to put United back in the lead.

United had won its first six away games of the campaign.

The draw between Leicester and Man United gave Everton the chance to move above both of them — and into second place — by beating Sheffield United, and Carlo Ancelotti’s team took its opportunity.

Gylfi Sigurdsson scored in the 80th minute to earn Everton a 1-0 win at Sheffield United, which remains in last place and still without a victory after 15 games.

Everton has won four straight games in the league — just like how the team opened the season — and ensured there’s a Merseyside top two.

Manchester City continues to toil away in the shadow of the top four, picking up wins and clean sheets without particularly impressing.

A routine 2-0 victory over Newcastle in the pouring rain at Etihad Stadium was secured by goals from Ilkay Gundogan and Ferran Torres either side of halftime and lifted City to fifth place.

It was City’s fifth clean sheet in its last six matches, with manager Pep Guardiola eschewing flair to guarantee results after the team’s slow start to the season.

Aston Villa had far too much for Crystal Palace in its 3-0 home win, despite playing the whole second half with 10 men after Tyrone Mings collected a second yellow card just before halftime.

Hard-working Villa striker Ollie Watkins played a part in all three goals, scored by Bertrand Traore, Kortney Hause and Anwar El Ghazi. Villa has picked up 10 points from a possible 12 this month.

Southampton had two second-half goals ruled out by VAR in a 0-0 draw at Fulham in the day’s other match.

‘Big Sam’ pulls off another stunner at Anfield in EPL