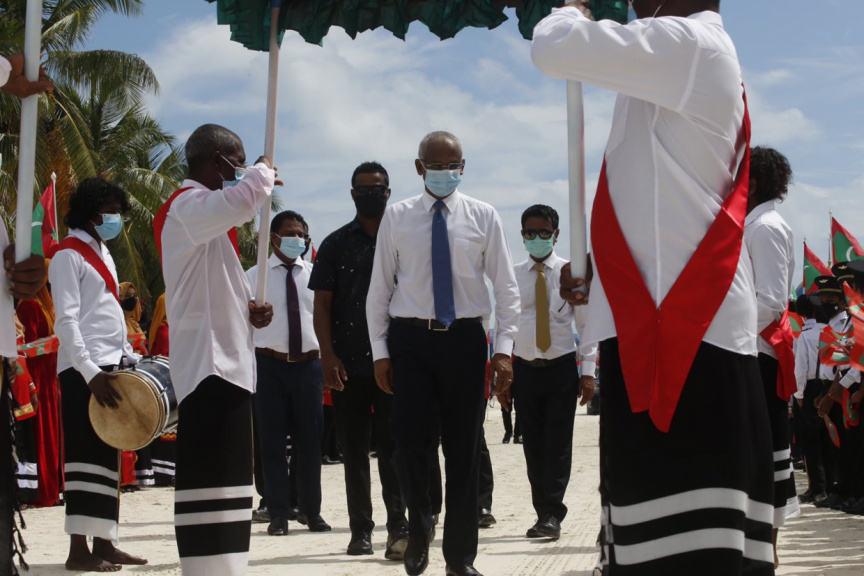 President Ibrahim Mohamed Solih (C) is welcomed upon arrival to H. A. Hoarafushi on November 19, 2020. (Photo/RaajjeTV)

President Ibrahim Mohamed Solih travelled to H. A. Hoarafushi on Thursday, in his first trip outside the greater Male’ region in approximately nine months.

The President’s visit to Hoarafushi is for the official opening of the airport developed in the island.

The visit to Hoarafushi marks his first trip outside of the greater Male’ region since the COVID-19 outbreak was discovered in the capital.

The President is accompanied in the visit by Transport Minister Aishath Nahula. They were welcomed upon arrival at Hoarafushi by Hoarafushi MP Ahmed Saleem and senior government officials.

The Hoarafushi Airport is scheduled to be officially opened in a ceremony at 04:00 pm this Thursday.

The national airline, Maldivian conducted a successful test flight to the airport earlier this week.

The Hoarafushi Airport was developed by Maldives Transport and Contracting Company (MTCC) and is the biggest infrastructure development project completed by the current administration.

The airport was developed with a 1.2 kilometer runway, an 8,635 square meter apron, a taxiway, service roads, a 9,473 square meter parking area and a 1,718 square meter fire access road.

The former administration had planned on developing an airport in H. A. Maafinolhu. However, the current administration, after it came to power, decided to change the location of the airport to Hoarafushi.

345,000 square meters of land was reclaimed from the Hoarafushi lagoon for the project.

Safeguarding Maldives from terrorism is a high priority

Minor arrested in connection to kidnapping of woman