Nasheed: JSC's composition will be revised, it’s not getting delayed 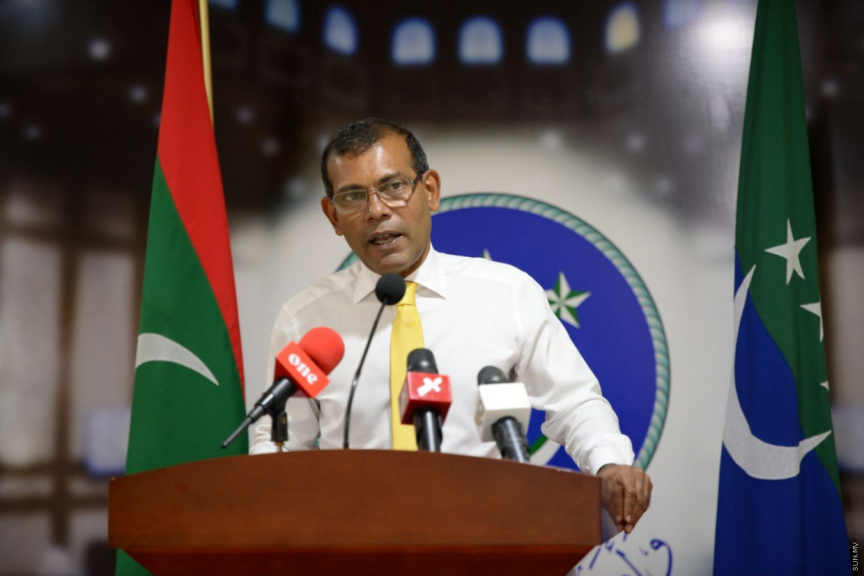 Parliament Speaker, former President Mohamed Nasheed brushed aside concern over the delay in delivering the promised changes to the composition of Judicial Service Commission (JSC) on Thursday, stating that he does not believe it’s getting delayed and that it will be done before the end of the current presidential term.

Changing the composition of JSC was one of current Maldivian administration’s electoral pledges.

In a press conference at the Parliament on Wednesday morning, Nasheed, who is leader of ruling Maldivian Democratic Party (MDP), said that the current administration will deliver the pledge before the end of its five years.

“I don’t believe that changing JSC’s composition is getting delayed. It’s one of MDP’s pledges. It’s part of the government’s legislative agenda. I believe we will get this done within the five years,” said Nasheed, when asked by a reporter for the reason for the delay in making the changes.

Nasheed, who is a member of JSC as Parliament Speaker, said that he has “no doubt whatsoever” that the pledge will be delivered.

“Whether or not it is right for the Parliament Speaker and Civil Service Commission’s President to be in JSC, this is not a question we shouldn’t be asking as we near 12 years to our Constitution. That’s why this is in, why this was included in MDP’s manifesto,” he said.

Nasheed said that the current JSC is engaged in important and efficient work. And that while some may harbor certain concerns, judicial reform is crucial work.

“Because certain people are no longer able to maintain the relationships they had with judges, because they lost those relationships, it will create concern from them. There’s nothing that can be done about that,” he said.

JSC has investigated multiple judges, requesting the Parliament to dismiss judges they found were involved in politics or corruption. Several judges have resigned in face of impending dismissals.

Mahibadhoo MP Ahmed Tariq (Tom), a parliamentarian from PPM, submitted legislature to revise the Constitution to change the composition of JSC in August. However, the legislature was pushed out of the Parliament in October.

The JSC is often described by the opposition as an additional political branch of MDP.