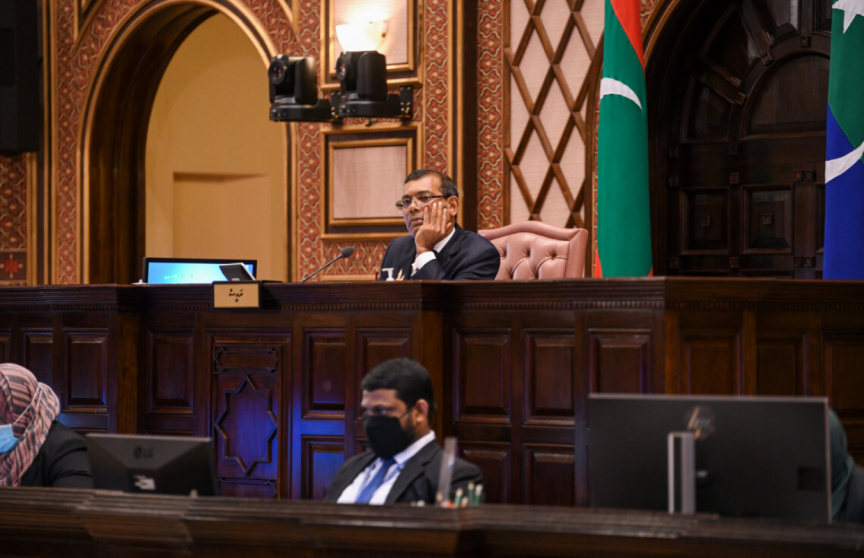 Parliament Speaker, former President Mohamed Nasheed said he does not believe owners of Maldivian resorts will deliberately mistreat their employees, as the Parliament engaged in a debate on an emergency motion on Tuesday, in response to a COVID-19 fatality linked with a resort island.

The emergency motion was submitted to the Parliament by Kudahuvadhoo MP Ahmed Amir, after Adam Naseer, 60, Dh. Maaenboodhoo, an employee of Kandima Maldives, died from COVID-19 on October 30, prompting allegations of negligence against the resort’s management.

After concluding the debate, Nasheed said that the owner of Kandima Maldives has been a longtime operator of tourist establishments, and that he does not believe the portrayal that the case involves negligence from the resort owner is fair.

“I don’t believe it’s the aim of resort operators to straight-out, deliberately inconvenience and mistreat their employees. I have seen the heads of resorts treating their employees very well,” he said, defending Kandima’s owner.

“I don’t believe it’s the best for us to raise this case and imply or portray negligence from the resort owner.”

Nasheed said that parliamentarians wish for the rights of resort employees to be ascertained, though resorts may not be deliberately mistreating employees.

Adam Naseer was taken to the regional hospital in Dh. Kudahuvadhoo on October 30, two weeks after he fell severely ill. He died four hours later, and tests conducted on his came back positive for COVID-19.

His death marked Maldives’ 38th COVID-19 related death, and led to the discovery of a cluster in Kandima. At least 60 people have tested positive from the resort.

Health Emergency Operations Center (HEOC) spokesperson Dr. Nazla Rafeeq has told the press that Kandima made contradicting statements to authorities regarding the case, and that the management had not reported an illness in the resort prior to the fatality.

Tourism Ministry has suspended the operating license issued to the resort.