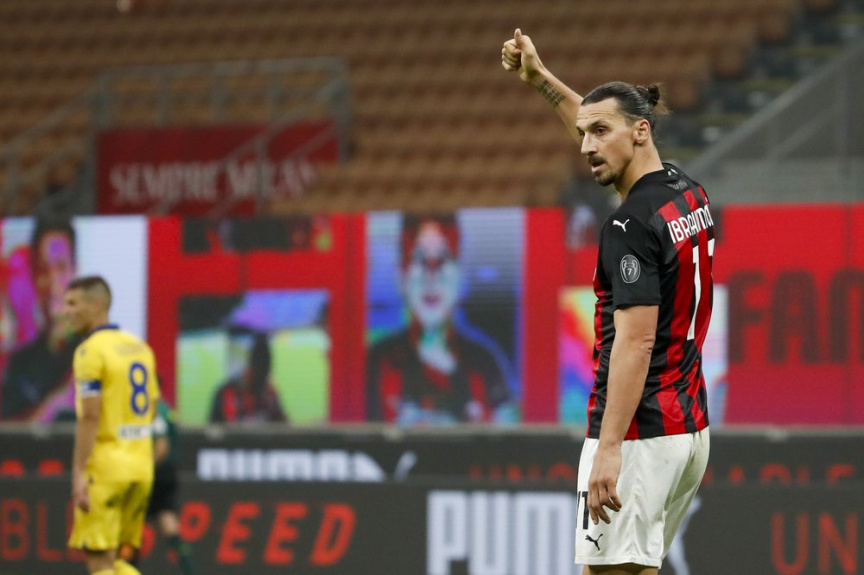 AC Milan's Zlatan Ibrahimovic celebrates after he scored his side's second goal during a Serie A soccer match between AC Milan and Verona, at the San Siro Stadium, in Milan, Sunday, Nov. 8, 2020. (AP Photo/Antonio Calanni)

MILAN (AP) — Zlatan Ibrahimović said last season that if he’d been at AC Milan from the outset the Rossoneri would have won the title. He could be proved right this campaign.

Many scoffed at Ibrahimović’s statement in July, despite it coming moments after an extraordinary 4-2 victory over Juventus, putting it down to another one of the outspoken forward’s outlandish comments.

Milan had been in turmoil for several years, changing owners twice and not finishing higher than fifth in the league since 2013.

The team was 12th when Ibrahimović returned to the club in January, eight years after his departure — and that of others — sparked a spiral of decline.

Milan is currently two points clear at the top of the league and hasn’t lost in Serie A since March, in its last match before the coronavirus-enforced shutdown.

When soccer resumed, the Rossoneri then went on a 23-match unbeaten run that was ended by Lille in the Europa League on Thursday.

Much of that credit has to go to Ibrahimović, who has scored 18 goals in the league since his return, including eight in five appearances this season to top the Italian scoring charts.

Ibrahimović penned a new one-year contract at Milan in August and sports director and former Rossoneri defender Paolo Maldini recently said the club is ready to discuss extending that deal.

Ibrahimović scored again on Sunday to rescue a point for his side as a towering header in stoppage time salvaged a 2-2 draw against Hellas Verona.

His scoring rate is even more impressive given that Ibrahimović turned 39 last month. He is showing few signs of his advancing years and he doesn’t feel it either.

“I feel like a child, I want to play,” Ibrahimović said. “It could be the opposite, that I can’t manage to play anymore, so it’s better like this.”

However, Ibrahimović was also angry at himself for missing a penalty — the third time he has done so this season.

That illustrates the hunger the Swedish forward still has, despite his already-bulging trophy cabinet.

“I’m angry, today’s draw is not okay,” Ibrahimović said after Sunday’s match. “We had so many chances ... but it’s an important point, it’s important not to lose faith, although it’s obvious that how the table is at the moment we want to win them all.

Ibrahimović became the first Milan player to score in seven successive league matches and was asked whether Serie A is now easier than his previous stints in Italy.

“Maybe it’s me who’s stronger,” he said with a smile.