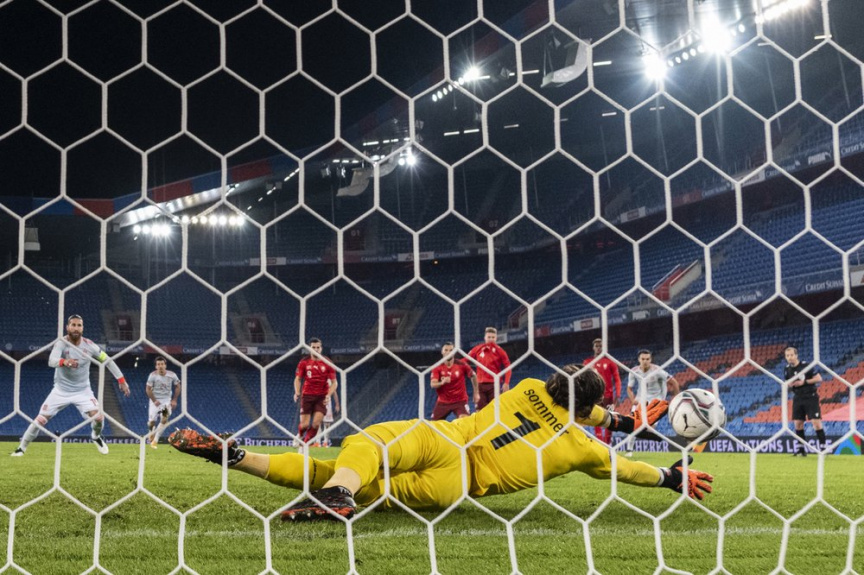 On the night of his European men’s record-setting 177th international appearance on Saturday, he was given two chances from the spot to celebrate with a goal.

Ramos missed them both.

Switzerland goalkeeper Yann Sommer twice guessed right, and dived to his right, to save in the 57th and 80th minutes. Though the first was well struck, the second was a flat, slow flop of an attempted chip and kept Spain trailing by one goal.

Ramos was spared further embarrassment by substitute Gerard Moreno firing an 89th-minute leveller in a 1-1 draw in the Nations League.

Still, Spain coach Luis Enrique was not going to lose faith in his captain who is among world soccer’s most battle-hardened defenders.

“Ramos hadn’t missed in 25 tries,” Enrique said. “If there had been a third penalty, he would have taken it as well. And a fourth, and a fifth.”

The Ramos drama, as he passed Italy goalkeeper Gianluigi Buffon’s European men’s mark of 176 international games, took some attention from a high-class goal that gave Switzerland a 26th-minute lead.

Spain’s lapse in Switzerland let Germany take the lead in Group 4 of the Nations League top tier ahead of their decisive meeting on Tuesday in Seville.

Germany won 3-1 against a Ukraine team that lost four players to positive tests for COVID-19 on Friday.

Though Ukraine took a surprise early lead, Leroy Sane soon leveled for the 2014 World Cup winner. Timo Werner then scored twice on his return to the Leipzig stadium where he made his name before an offseason move to Chelsea.

The second-half goal was scored by midfielder N’Golo Kanté pouncing on a loose ball fumbled by Portugal goalkeeper Rui Patricio.

Even without the injured Kylian Mbappe, France ensured it will top Group 3 ahead of completing its program against Sweden on Tuesday.

The four top-tier group winners qualify for a knockout mini-tournament scheduled next October, and to be hosted by the Group 1 winner. That will be Italy, Poland or the Netherlands.

Sweden improved its chances of avoiding relegation to the second tier by beating Croatia 2-1 on Saturday.

For the first time on Saturday, UEFA canceled a Nations League game because of COVID-19 infections.

Norway was due in Romania to play on Sunday, but could not travel after players were ordered into quarantine by its home health authorities.

Norway risks a 3-0 loss by forfeit for not fulfilling the match scheduled in Bucharest. There are no clearly available dates in the international calendar to make up the game.

UEFA said it sent the case to its disciplinary committee for a decision.

Norway is currently level with Austria at the top of their group in second-tier League B. They are due to meet in Vienna on Tuesday in the final round.

In League C, Montenegro is one point clear in Group 1 from Luxembourg, which lost at last-placed Cyprus 2-1.

Montenegro drew against Azerbaijan 0-0 playing the second half with 10 men. The game went ahead in neutral Croatia because UEFA ruled Azerbaijan cannot host home games during conflict with neighboring Armenia.

In fourth-tier League D, Malta beat Andorra 3-1 and trails three points behind Group 1 leader Faroe Islands which it hosts next. The Faroes missed the chance to seal promotion by drawing at Latvia 1-1.

Iceland coach Erik Hamrén will leave the job days after losing in the European Championship playoffs.

Hamrén said at a news conference on Saturday he will step down after Nations League games against Denmark on Sunday and England on Wednesday.

The Swedish coach, who guided his home nation to the Euros in 2012 and 2016, said: “The World Cup qualifiers start in March and it is better in my mind that someone else takes over.”