China responds to Pompeo: US respecting sovereignty of nations is a joke 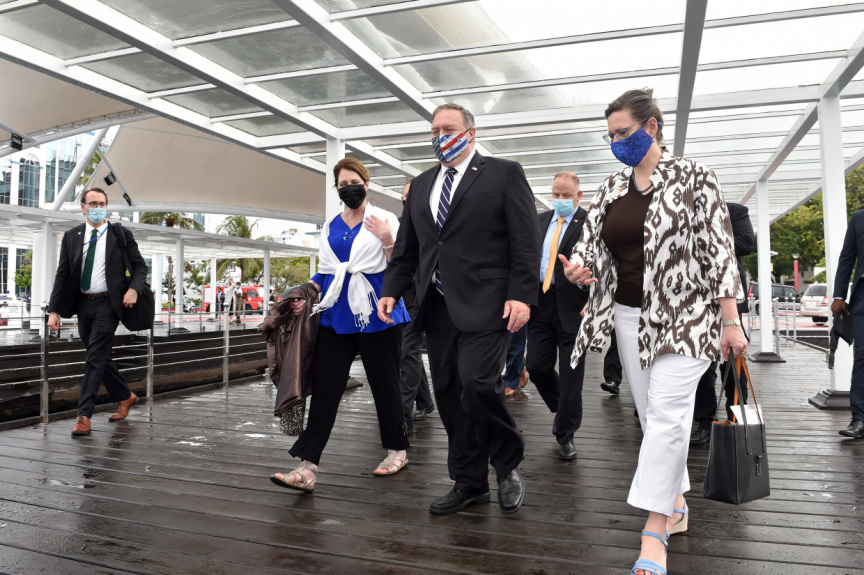 October 28, 2020: US Secretary of State Mike Pompeo during his official visit to the Maldives. (Photo/Foreign Ministry)

China has responded to statements critical of the nation made by the US Secretary of State Mike Pompeo during his visit to the Maldives yesterday.

Secretary Pompeo, the first US senior official to visit the Maldives since James Baker in 1992 was extremely critical of Chinese activity perceived as threatening and lawless behavior.

He also noted that China had encroached onto the territories of its neighbors and even failed to address illegal fishing practices which negatively impacted a number of nations. Secretary Pompeo also stated that Chinese state-owned companies were involved in activities damaging the environment.

The Chinese Embassy in the Maldives today, responded to the statements by Secretary Pompeo in a long statement issued.

In its statement, the Chinese Embassy stated that Secretary Pompeo had attempted to create a rift between the Maldives and China. The statement also read that US politicians were attempting to do the same with a number of nations as well.

China described the US behavior of influencing other nations as detrimental to international relations.

"According to surveys conducted by international authoritative institutions, the Chinese people's satisfaction and trust toward the CPC-led Chinese government counts as high as 93 percent." read the statement by China.

China also questioned the performance of the US in fighting COVID-19 while comparing China's "strategic victory" over the virus.

China also stated that the US brought up the militarization of the South China Sea and defended its activity in the area by stating that they were development activities and deployment of necessary defense facilities on the Nansha Islands was an exercise of China's right to self-preservation and self-defense under international law.

"It is reasonable, legal and within our sovereignty. On the contrary, the US military vessels and aircraft have been frequently carrying out exercises and close-in reconnaissance in the South China Sea, intending to increase tensions and flex muscles. The US itself is the major factor driving "militarization" in the South China Sea." read the statement.

The statement read that climate change was a challenge faced by everyone and as the biggest developing country, China was actively implementing national climate change strategies and policies.

"As a sharp contrast, the US has already announced its withdrawal from the Paris Agreement, which is a backlash and obstacle for the international community to tackle climate change. How does the US feel qualified to point fingers at China in this regard?" read the statement.

China also said that during his trip, Secretary Pompeo had spread political rumors.

"Pompeo openly pressures middle and small countries to take sides. His claim that the US respects sovereignty just sounds like a joke." read the statement by China.

China said that the cooperation between Maldives and China was of common interest of both nations which was beneficial to both.

"China’s development is an opportunity, not a threat." read the statement by China.

Trump orders Chinese owner of TikTok to sell US assets