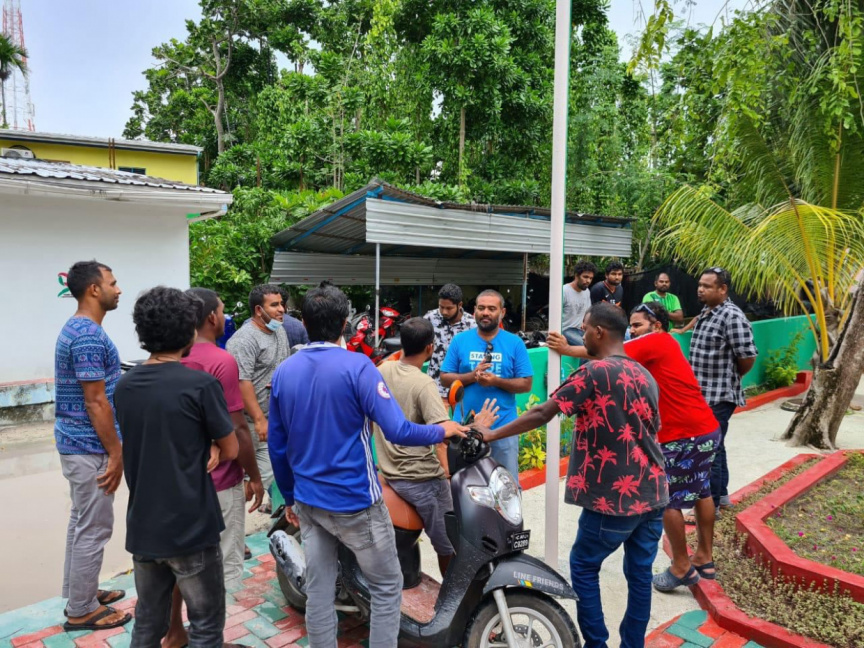 Guesthouse owners in A. A. Thoddoo gathered inside Thoddoo Council grounds on October 15, 2020 to protest delay in authorization to reopen guesthouses.

Guesthouse owners in A. A. Thoddoo are staging a silent protest over the delay in authorization for their businesses to reopen following the COVID-19 pandemic linked closure of guesthouses in Maldives’ residential islands.

The government ordered the closure of guesthouses in residential islands on March 17.

Guesthouses in residential islands outside greater Male’ region are being permitted to reopen after the seven month closure starting this Thursday.

The guesthouses, as well as the islands where they are situated, are required to fulfill specific requirements before they can be allowed to reopen. At least nine islands were permitted to reopen guesthouses this Thursday. But it does not include Thoddoo, which is home to a significant number of guesthouses.

Thoddoo’s guesthouse owners have been engaged in a silent protest at the local council office since the afternoon over the issue.

One guesthouse owner involved in the protest told Sun that they were denied the opportunity to reopen the guesthouses in the last minute because the council failed to send a letter to Tourism Ministry stating they do not object to reopening guesthouses.

He said the council did not send the letter citing lack of police services in the island.

“When we failed to receive permission, we found out at the last minute that the council did not send a letter it needed to send. And when we met the council, they said it cannot be possible without everyone’s cooperation. And that we cannot receive permission because there aren’t police here [in Thoddoo],” he said.

He said that they understood police officers needed food and accommodation to be sent to Thoddoo.

“Guesthouses offered to provide food and accommodation for six months. And for them to work out of the council,” he said.

He said the police as well as the Local Government Authority had provided assurance police would be sent to Thoddoo.

“But the council says they cannot authorize it until they receive official word from the Home Ministry,” he said.

Thoddoo, with a population of approximately 2,000 residents, does not have a police station, or even a police desk.

“We do not intend to leave until the council provides us with an answer. We will not stop the protest until they give us an answer,” said one guesthouse owner.

Thoddoo has 37 registered guesthouses, and 10 guesthouses have requested permission to reopen.

“We have tourist bookings for 17th of this month. This is a huge loss, to be denied permission at the last minute. We are in state of confusion now. We don’t have an answer to give to the tourists who made bookings with us,” he said.