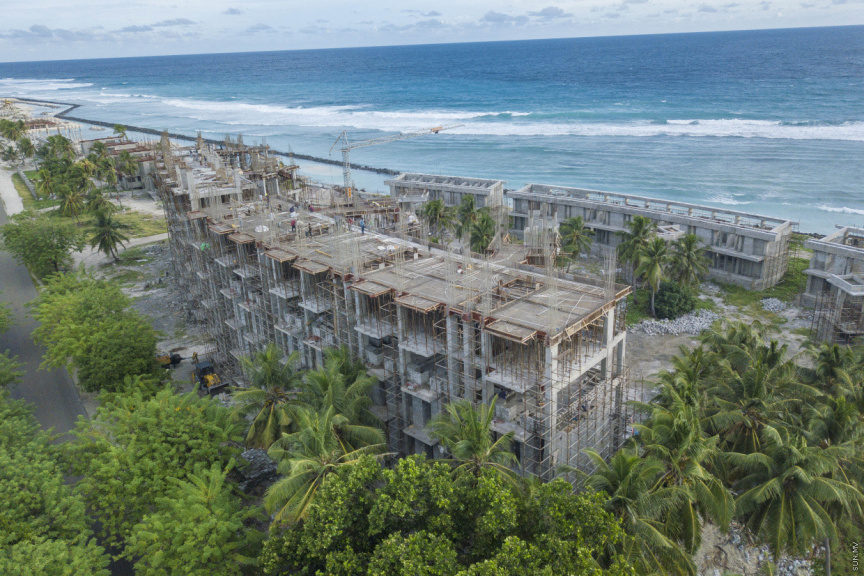 Construction in progress at the police training academy financed by the Indian government in Addu City. (Sun Photo/Fayaz Moosa)

Health Emergency Operations Center (HEOC) said on Monday that additional workers from the company contracted to build the police training academy in Addu City visited the property where 128 Indian workers recently brought in for the project were undergoing quarantine, and that two of them have tested positive for COVID-19.

The 128 workers travelled to Addu on September 13. They had flown in directly from India.

54 of the workers tested positive during routine testing after the quarantine period, and now an additional two workers who had contact with them have also tested positive, increasing total active cases in Addu to 56.

In a press conference on Monday night, HEOC spokesperson and epidemiologist Dr. Nazla Rafeeq said that health authorities had also tested the security guard at the worksite after the first 54 cases were identified.

Nazla said the test result on the security guard was confirmed positive on October 2.

“The accommodation of the security guard is situated within the company’s main worksite. It’s separate from where the quarantined workers were accommodated. We therefore placed this site under monitoring as soon as this came to our attention,” she said.

Nazla said there are total 230 workers in the main worksite, and that they are all being tested. The results on one of them came has come back positive.

She said that there are also eight more workers from the company, in additional to the 128 workers, who had travelled to India on a different date. One of them has also tested positive.

“We have been informed that this person too, has made a couple of visits to the quarantine site,” she said.

Nazla said that the main workstation, as well as additional properties linked with the workers at the site have been placed under monitoring.

She said that the quarantine violations have also been reported to the police.

377 people have been tested in connection to the cluster. 56 have tested positive, 85 have tested negative, and the results on 74 remain pending.