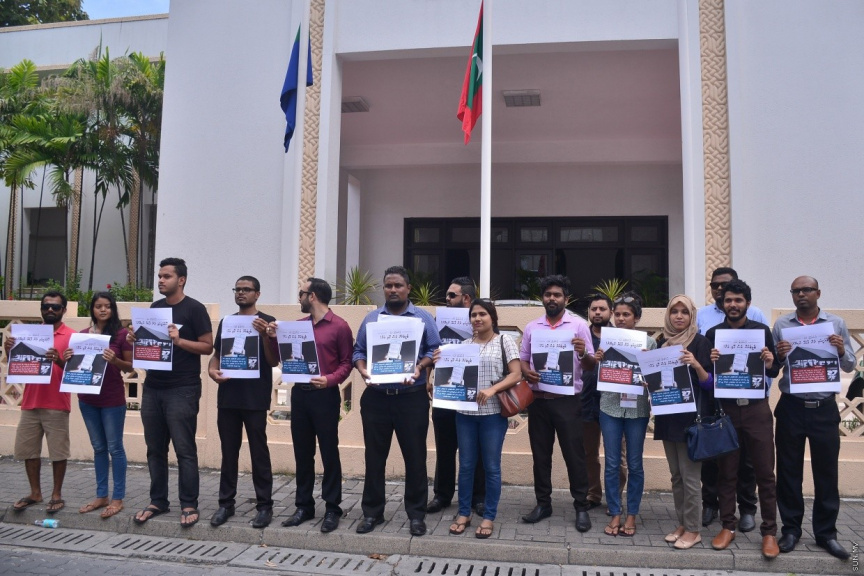 Media personnel are pictured protesting outside the parliament regarding defamation laws in President Yameen's administration.

A new bill regarding defamation proposed by the government would not impede on the freedom of media and its work, the Attorney General’s Office has stated.

The statement comes after concerns were raised regarding the possible outcome that the bill on media freedom. The government is set to propose 28 bills to the parliament within the current session.

Attorney General Office Media Director Hussain Hassan speaking with Sun last night said that the bill would not be formed in a way to facilitate the closure of media or imposition of fines on media outlets. He stated frankly that the bill was not targeted for media outlets.

Anti-defamation laws during President Yameen’s administration was very much targeted towards media. Under the law, countless media outlets were imposed with fines. The law was later proposed to be repealed by the Parliament after the Presidential elections. Former MP for North Henveiru and current Foreign Minister Abdulla Shahid proposed to repeal the law.

Repealing the law was a pledge made by President Ibrahim Mohamed Solih, who did so after coming to power.  Along with the new defamation bill, the government has also proposed the Maldives Media and Broadcasting Authority bill.