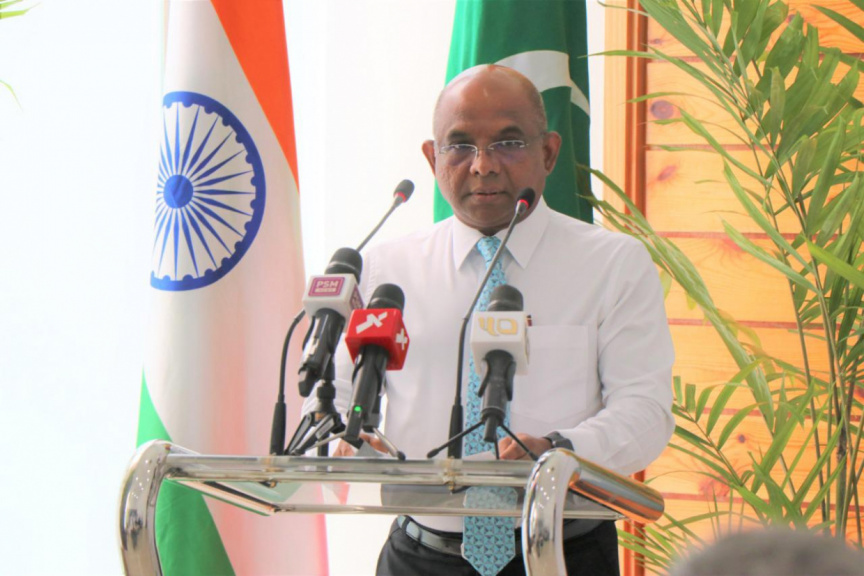 Maldivian Foreign Minister Abdulla Shahid said on Saturday that the establishment of cargo ferry service between India and Kulhudhuffushi city is the beginning of the end of the high dependency on the capital Male’ city for development needs.

The cargo ferry service links the ports of Tuticorin and Cochin in India with the ports of Kulhudhuffushi and Male’ in Maldives.

MV MCP Linz made its maiden voyage to Kulhudhuffushi earlier this Saturday.

In a ceremony to mark the cargo ship’s maiden voyage to Kulhudhuffushi, Shahid said the cargo ferry services will see the realization of the implementation of a true decentralized system.

He said that the government, instead of focusing on developing Male’, has rolled out development projects across Maldives, ensuring that development is enjoyed by citizens in outer lying regions of the country.

“One of the biggest accomplishments the ferry service initiated today will enable, is the beginning of the end of the dependency on Male’ for development,” he said.

Shahid said that the establishment of the ferry services was proof of the government’s commitment to fulfilling electoral pledges, and described it as the beginning of the development of northern Maldives.

“The beginning we are embarking on today is a new beginning for development in the north. Every door that is opened, and every bridge, in truth, will breathe life into the economy. It will facilitate the transport of cargo from one place to another. This is what true [economic] revitalization is,” he said.

Shahid also provided assurance of the government’s commitment to developing the airport in H. Dh. Hanimaadhoo as a fully functioning international airport. He said that redevelopment of the airport will begin in early 2021.

“The government wants to fill the entire north, the entire larger Thiladhunmathi Atoll, with the wealth of tourism. We will enable this,” he said.

The ceremony to mark MV MCP Linz’s maiden voyage to Kulhudhuffushi was held virtually, and was attended by Indian High Commissioner to Maldives Sanjay Sudhir, parliamentary representatives for Kulhudhuffushi, and local council members.

MV MCP Linz is operated by Shipping Corporation of India (SCI). It has the capacity to carry 380 TEUs and 3,000 metric tonnes of bulk cargo, and has a turnaround time of approximately 10 days for its voyages.

The ship will make two monthly voyages between Maldives and India.

Shahid: No chance of establishing relations with Israel