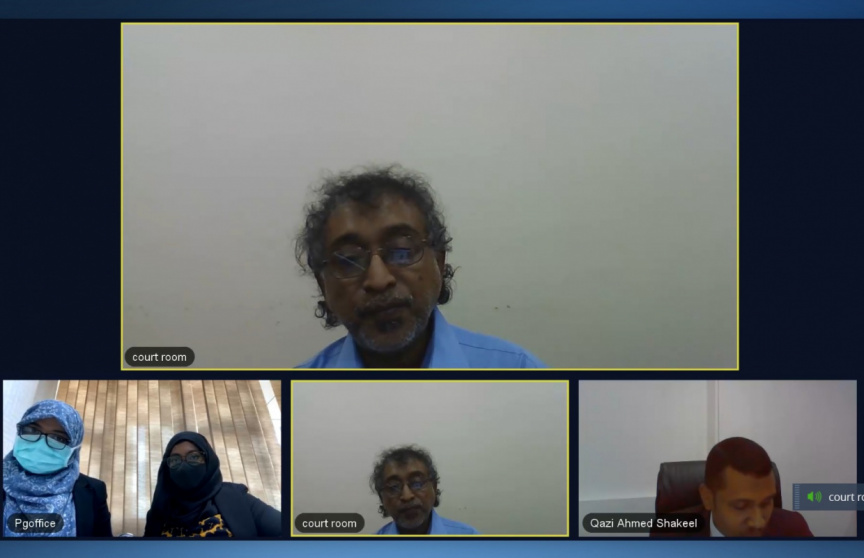 The online trial of the former head of the Financial Intelligence Unit (FIU) of the Maldives Monetary Authority (MMA), Ibrahim Athif Shukoor.

The Prosecutor General’s Office has stated that former head of the Financial Intelligence Unit (FIU) of the Maldives Monetary Authority (MMA), Ibrahim Athif Shukoor has requested for a plea agreement with the office.

Athif was charged money laundering and financing of terrorism in late February 2020. He was charged for his failure to notify the authorities regarding suspicious financial activity in relation to the massive MMPRC scandal. Athif served as the head of the FIU from November 4, 2014, to June 21, 2015.

The FIU works independently from the MMA and is tasked with notifying authorities of suspicious financial activity.

The preliminary hearings of Athif’s case were held in the Criminal Court today. Athif attended the online hearing without an attorney.

When asked if he wished to appoint a lawyer, Athif replied that he was in discussions with the PG Office for a plea agreement. He requested for additional time until the discussions were over.

PG Office spokesperson confirmed that Athif had requested for a plea deal, which was not yet decided by the office. The PG Office was in discussions for the matter.

The Prevention of Money Laundering and Financing of Terrorism Act. Athif is accused of not forwarding a report on suspected criminal activity to law enforcement authorities, despite being informed and having knowledge of suspected money laundering activity in a Suspicious Transaction Report by the Bank of Maldives regarding the deposit of MVR 59,748,000 through a cheque of the MMPRC to the bank account of the SOF company on November 25, 2014.

If found guilty, Athif could face a fine of between MVR 10,000-500,000 and a prison sentence of one to ten years. The next hearing of the case is scheduled for November 2, 2020, where Athif will be permitted to respond in the presence of a lawyer.