NDMA: State will not incur losses due to Hulhumale’ medical facility 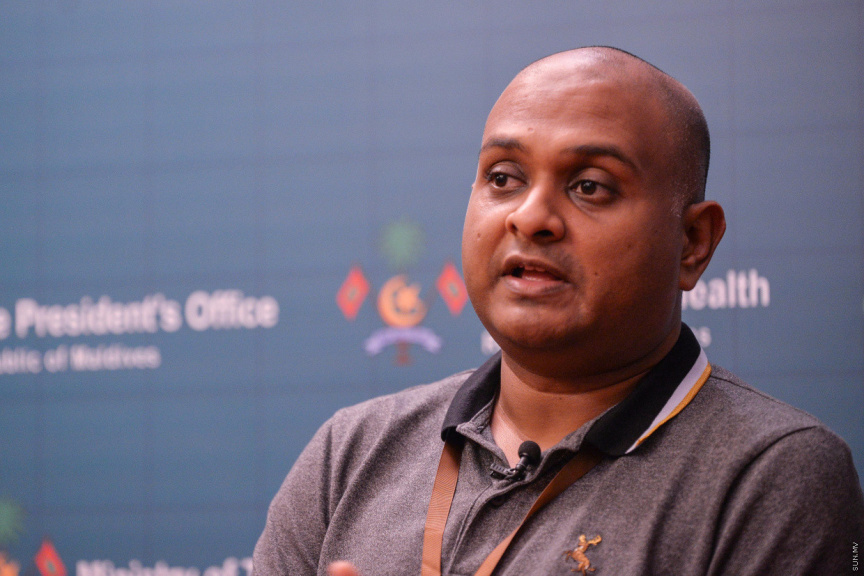 National Disaster Management Authority (NDMA)’s Chief Executive Hisan Hassan said on Wednesday that he does not believe the fact that the COVID-19 medical treatment facility in suburban Hulhumale’ was built on private property will result in any losses to the state.

The Hulhumale’ medical facility is the main treatment facility for COVID-19 patients in Maldives.

Auditor General’s Office released its compliance audit report on NDMA’s COVID-19 related spending on Tuesday. It states that the state may face future legal problems as the facility was built on privately owned land, and recommends that the state take measures to mitigate the possible problems.

In a press conference on Wednesday evening, Hisan said he found the information on the audit report regarding the facility disappointing.

He described the Hulhumale’ medical facility as the most crucial measure taken by the National Emergency Operations Center (NEOC) in response to the pandemic. And said that the benefits of building the facility are clearly visible.

“If the place, the Hulhumale’ medical facility hadn’t been built, those who get sick from Covid or those who require medical treatment may very likely been rendered on the streets,” said Hisan.

Hisan said that authorities had assessed multiple properties in Male’ and Hulhumale’ before deciding on the property in Hulhumale’.

“The properties assessed include the STO Hiyaa facility in Hulhumale’ Phase II, and multiple other properties. We also checked the accommodation block used by BUCG for the airport project and conducted studies,” he said.

Hisaan said the authorities finally decided on building the facility on the property adjacent to the Tree Top Hospital, which was designated as the first COVID-19 hospital, and explained the reasons for the decision.

He said that the property was large enough to accommodate up to 300 patients, if necessary, and most of the construction on the property was already done, which meant that it would save both time and money than building the facility on vacant land.

He also noted that Hulhumale’ in linked with Male’ via a bridge, meaning that doctors and nurses will have easy access to the facility, and having Tree Top Hospital adjacent to the facility would cut down expenses in terms of logistics, and improve the speed of treatment.

“The state or any government institution does not have to pay rent for this property. And the duration of the agreement can be extended. Therefore, we do not believe this will result in any loss to the state,” he said.

Following the decision to build a 300-bed medical facility for COVID-19 patients in Hulhumale’, NDMA was allocated a 42,071 square foot land and the buildings on the land under a “handover agreement” signed between NDMA and Housing Development Corporation (HDC) to build a temporary medical facility on March 29.

NDMA told the auditors that the decision to build the facility on the property was made following discussions between the national taskforce and NEOC.

The Auditor General’s Office, citing the possibility of the state having to make additional spending on privately owned property in the COVID-19 situation is prolonged, recommended that a plan for the future use of the property be made under counsel from relevant agencies, and take measures to solve possible legal issues pertaining to the ownership of the property which may arise in the future.

The report states that while a large number of assets were procured for the facility, a register of assets wasn’t maintained as required under the public finance regulation.

In response to this, Hisan said that an inventory of all equipment procured for the facility was taken through State Trading Organization (STO), and that Indhira Gandhi Memorial Hospital (IGMH), which is currently managing the facility, is also managing inventory.

“But I note that none of this was mentioned on the audit report,” said Hisan.