Ex-President Waheed refuses to talk to police, seeks a lawyer 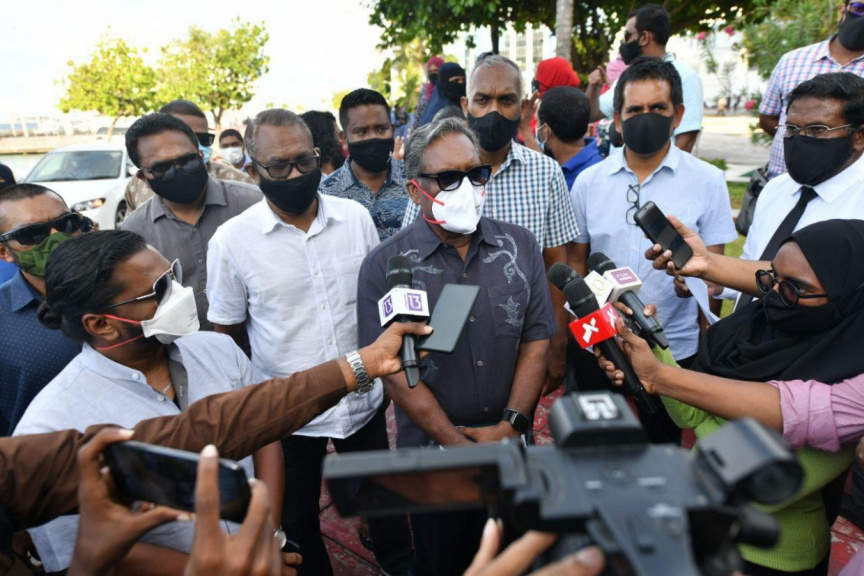 Special Advisor to the opposition PPM-PNC coalition, former Maldivian President Dr. Mohamed Waheed Hassan Manik said he did not speak to the police when brought in for questioning on Sunday, and chose instead to exercise his right to remain silent.

Waheed was served summons to present himself for questioning at 04:00 pm this Sunday. Speaking to press after exiting the police headquarters, Waheed said that he was brought in connection to the rally held by the opposition in Male’ City on Friday.

Waheed, along with several other opposition politicians who attended the rally, have come under fire for failing to adhere to an order by Health Protection Agency (HPA) which requires for masks to be worn at all times in public locations in Male’ City, along with orders regarding social distancing and public gatherings.

“I was summoned by the police over the allegation I failed to wear a mask in accordance with the Public Health Act. And because my having spoken so loudly might have incited fear among some,” he said.

Waheed said he chose to remain silent when questioned by the police, and that he will proceed with the case with the assistance of a lawyer.

Waheed said he had worn the mask during the rally, and had only taken off the mask to deliver his speech. He said that he had been standing away from participants of the rally when he delivered his speech.

Speaking about the decision to hold the rally, Waheed said that it was only natural that people take to the streets when frustrated over lack of remedies for their concerns.

Waheed also accused the government of double standards in enforcing HPA’s orders, referring to when Parliament Speaker, former President Mohamed Nasheed was photographed without his mask during a book signing event earlier this month.

“But, bringing me in and not him proves only one thing. That it’s because I stand with the opposition,” he said.