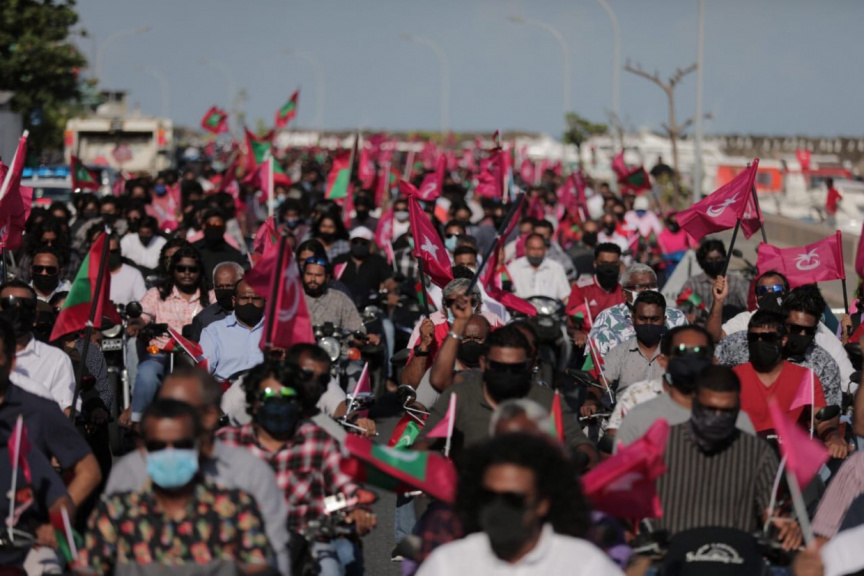 Opposition coalition parties PPM and PNC members have held rallies and protests across the nation against what they described as “selling out the nation” despite the threat of COVID-19 in the congested capital Male’ City.

Opposition parties declared the planned protests across the nation. The protests were held in Male’ City via motorcycles and involved top activists and senior officials. Rallies on foot were also held in various islands.

Mostly calling for the resignation of the President, party members and supporters described the current administration as a failed one. They also called for the freedom of imprisoned former President Abdulla Yameen who is serving a five-year sentence for money laundering.

Voicing anger towards alleged acts of corruption within the state during the situation with the pandemic, supporters of the opposition parties also expressed anger towards what they described as acts by the state that could see the country “colonized” by neighboring India.

A large number of youths were seen taking part in the motorcycle ride protests in Male’ City. This goes strictly against HPA advisories calling against large public gatherings that could increase the spread of COVID-19.

Already hit hard by the virus, the protests were some of the largest seen in the capital as of recently. Case numbers in the capital have skyrocketed since the beginning of August with a daily average of around 100-150.