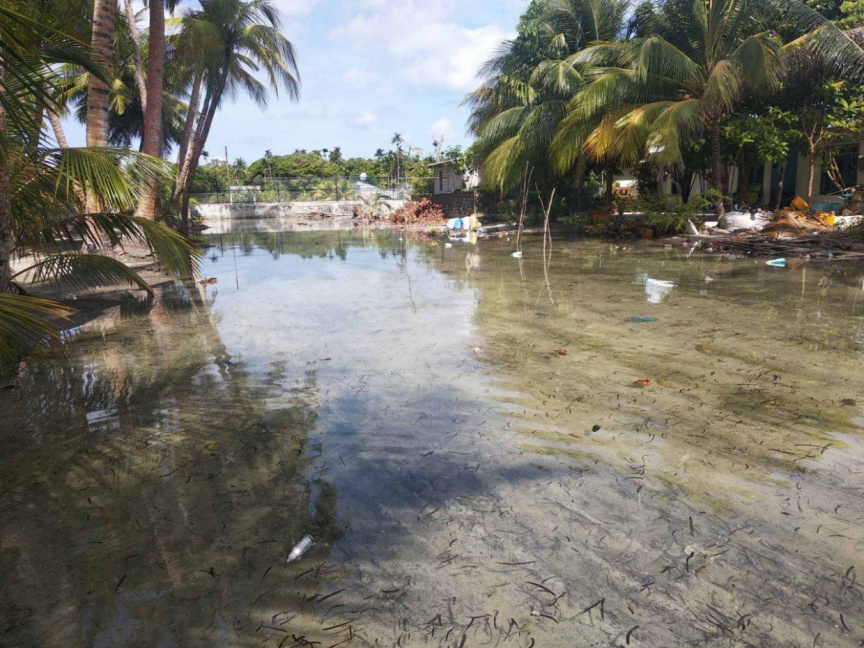 Kunahandhoo, a residential island located in L. Atoll, was affected by tidal flooding on Thursday, resulting in extensive damage to farmland.

Kunahandhoo Council vice president Shiruam Saeed told Sun the island began experiencing swell wave surges just after 01:00 in the afternoon. He said that the flood water has since begun receding.

The people of Kunahandhoo have a long history in farming. And with the urgent need to strengthen the national food security amidst the coronavirus pandemic led to more people taking up farming over the last few months. There are now some 100 farmers on the island.

Shiruam said the tidal flooding has destroyed crops watermelons and sweet potato, along with other produce grown on the island.

“The flood water reached knee-high. The walls near the coast were cracked. Approximately 10 farmland sustained damages,” he said.

Shiruam said the island has been repeatedly affected by tidal flooding in the past, but that the problem has worsened since the construction of the harbor, which has elevated the area but left other areas vulnerable to swell wave surges.

He said that arrangements have been made for 10,000 sacks of sand to be brought in through National Disaster Management Authority to mitigate the flooding.

“We experience swell wave surges about six times a month. We need a permanent solution to this. The youth of this island go to the sandbank to collect sand to fill the lower lying areas of the island. But we need an excavator to do this properly,” he said.