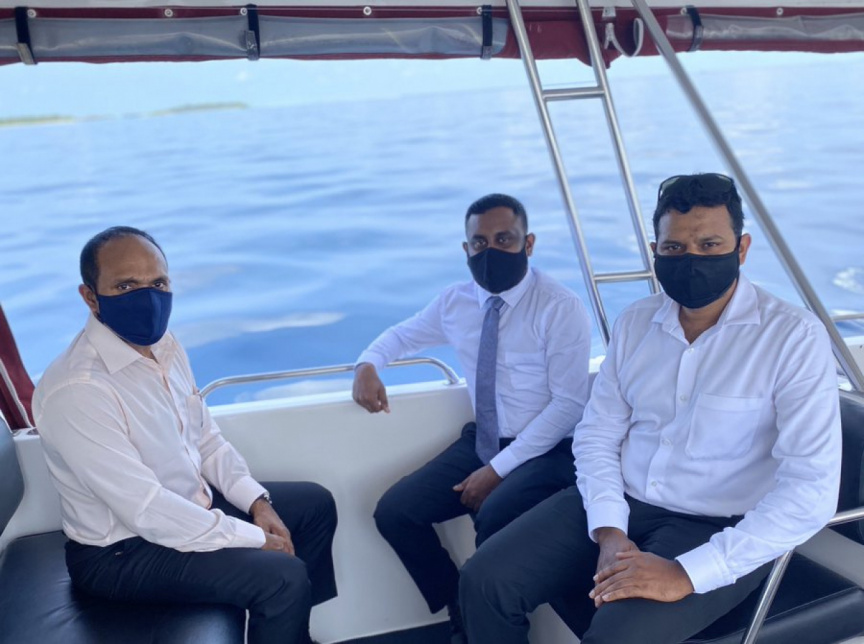 Lawyers for former President Abdulla Yameen has said that other attorneys are permitted to travel to Maafushi Prison without obtaining any permits, while they were not.

Yameen is serving a sentence of five years in prison after being found guilty of money laundering last year. His conviction has been appealed to the High Court. However, the state has brought new charges against Yameen.

Lawyers for Yameen expressed displeasure that authorities did not allow them on to the island of Maafushi after finding out that the attorneys had not obtained the necessary permits from the Council of Maafushi.

They have been expressing concern that they haven't been able to meet with their client. The Criminal Court on August 17, ordered to facilitate the meetings after a hearing of the new charges against Yameen had to be pushed back.

Maldives Corrections permitted Yameen's lawyers to meet with their client on the following day. When the lawyers reached Maafushi, Police in Maafushi called them to inform that a complaint had been lodged by the Council stating that the lawyers had not obtained the necessary permits to arrive on the island.

Due to COVID-19, certain permits are needed when traveling between islands. The lawyers had stated previously that the police had informed them to obtain the necessary permits before traveling to the island due to the circumstances.

However, Sun has confirmed that a lawyer for another inmate at the prison for a drug-related crime was permitted to meet with their client.

Lawyer Shazeem Waheed said to Sun that he had attended the prison with police and without obtaining any other permits.

"I had a meeting with my client at around 10 yesterday. I went with the Police, Corrections brought my client. We met and my client signed the statement, and I returned back to Male' with Police, no obstructions were faced." said Waheed.

Waheed was at the police station when he also learned that Yameen's lawyers were not permitted to meet with their client.

Yameen's lawyers have expressed concern over this. One of the lawyers, Adam Asif said that they were informed by Corrections that the meeting was arranged. They had also called the phone number provided to them to call two hours prior to the meeting. Corrections had not informed them that they required other permits.

"This lawyer (Waheed) also went to the prison for a meeting in the morning. No special permits or documents were needed. He did not meet with the people of the island as well. He went, finished, and came back." said Asif.

Asif said he was confounded as to why the Home Ministry was treating inmates with bias and discrimination, before adding that this was something Home Minister Imran does to make things hard for lawyers.

He also accused the Minister of trying to hold the hearings of the new charges against Yameen without permitting lawyer-client meetings.

"This is something personal by the Home Minister." said the lawyer.