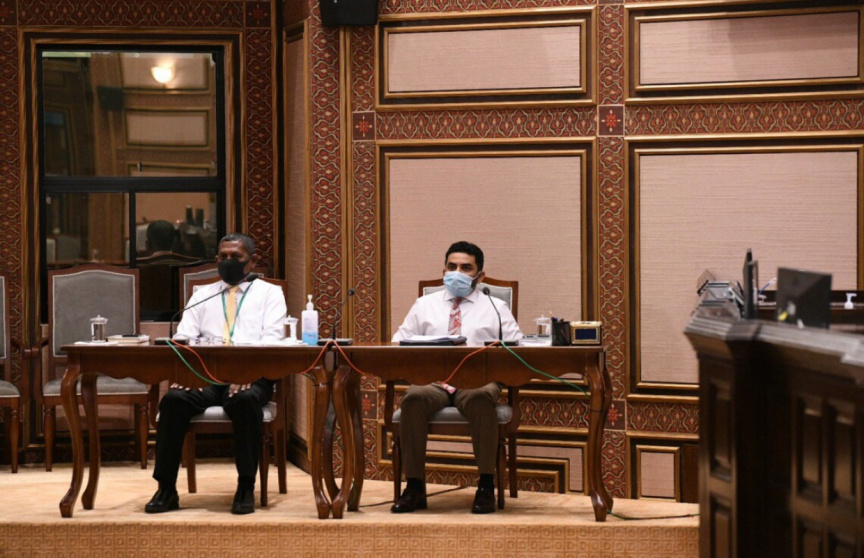 The parliament today began deliberating on the issues noted in audit reports into the compliance of state institutions regarding the expenditure for COVID-19 presented to the Parliament by MP for Vilimale Ahmed Usham.

The Audit Report into the Health Ministry's spendings revealed that the Ministry had awarded a contract to source 75 ventilators to Dubai based Executors General Trading under the pretext that it was recommended by the WHO. Out of the 10 ventilators that authorities received, it was identified that there the brands of ventilators imported and initially ordered were different with a number of features missing. The report cited multiple other issues regarding government expenditure and instances of unethical and dishonest conduct. The Auditor General's Office even ordered an investigation into the conduct.

Meanwhile, the report into the conduct of the Tourism Ministry showed excessive purchases, and financial misconduct as well.

A total of 47 MPs voted to deliberate on the matter proposed by MP Usham today.

MP Usham called on all state institutions to take important steps to prevent and stop such activity and conduct after noting that massive corruption activity were run with the knowledge and participation of heads of state institutions.

MP for South Galolhu Mickail Ahmed Naseem, speaking on the matter described the conduct of the ministries as abhorrent to take advantage of a situation where the lives of people were at risk. The MP said that misappropriation of assets and unfair enrichment of assets brought to save the lives of Maldivians were indeed inhumane. He called on the government to dismiss those who were responsible or alleged of these activities.

MP Mickail said that the Health Ministry and the state financial institutions had misled the parliament. The MP said that Health Minister Ameen had been behind ‘two thefts’.

“That is, the betrayal of public trust and the physical misappropriation of state funds by the Health Minister. I call for the dismissal of the Health Minister from the post at once. Also, the dismissal of the Deputy Minister and the chair of the bid-committee of the Ministry for misleading the committee. Anyone connected with this, should be dismissed without providing them the opportunity to carry out more of such acts.” Said the MP.

North Galolhu MP Eva Abdulla said that the world had shown the experience of people taking advantage of crisis situations to conduct acts of corruption. It was not to bring the downfall of the government to speak about these expenditures in the parliament and to hold the figures accountable. MP Eva noted that the true scale of the corruption was identified so quickly because the parliament had requested the audit by the Auditor General’s Office. She called on the government to take action based on the report as soon as possible.

“The report is good for every Maldivian to read, apart from the headlines. We encouraged to issue this report because we wanted to take action before things got worse.” Said MP Eva who added that if there was anyone who capable of influencing the investigation, that person should also be dismissed as of right now.