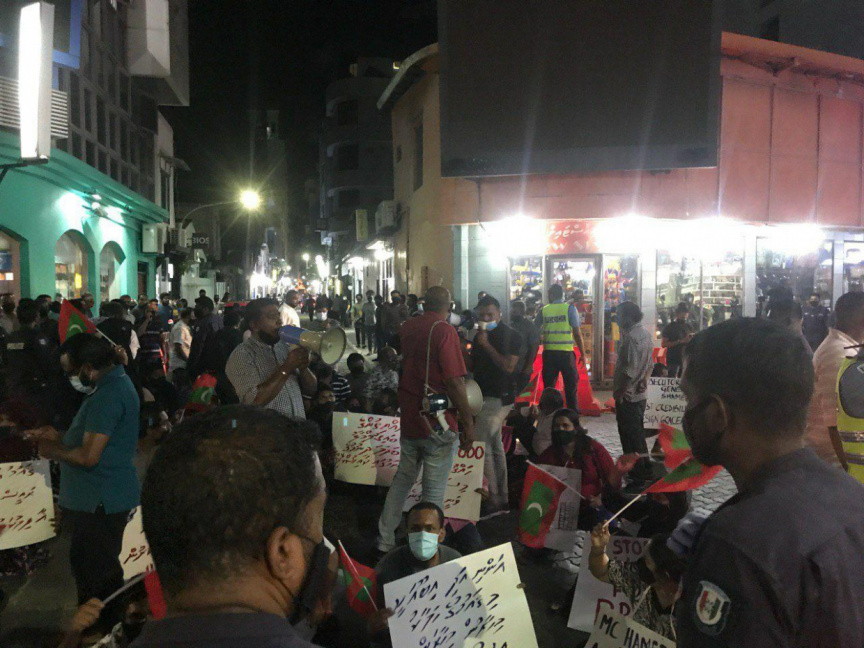 Health Minister Abdulla Ameen has criticized opposition protests in Male’ City when COVID-19 cases in the capital are on the rise.

Case numbers have been increasing significantly but is limited to the capital mostly, since the lockdown was eased on July 1. Speaking in a program of Raajje TV last night, Health Minister Ameen said that the protests were irresponsible and that COVID-19 was not something that affects a certain political party alone.

The Minister berated the protests by stating that right now was not the most appropriate time for such mass protests and that there were other ways of how political opinions could be voiced.

Opposition protests have been held on two days in the capital. Minor skirmishes have also occurred during the protests. The most recent protest, saw police officers being spat at, an act the opposition parties deny and condemn.

Minister Ameen said, “The situation with COVID-19 in Male’ right now is not right for such protests. This is also not the time to showcase size by gathering hundreds in the streets. If there is a difference of opinion with the government, there are other ways it can be voiced. There are ways to do it online as well.”

The Minister said that such a gathering meant that people would be taking the virus home with them. This leads to a risk for the elderly and high-risk individuals.

The Minister’s remarks come just a day after opposition leader Abdulla Abdul Raheem dismissed the threat of the virus, which he described as a ploy by the government to scare protesters. Abdul Raheem said that the protests would go ahead with safety measures.