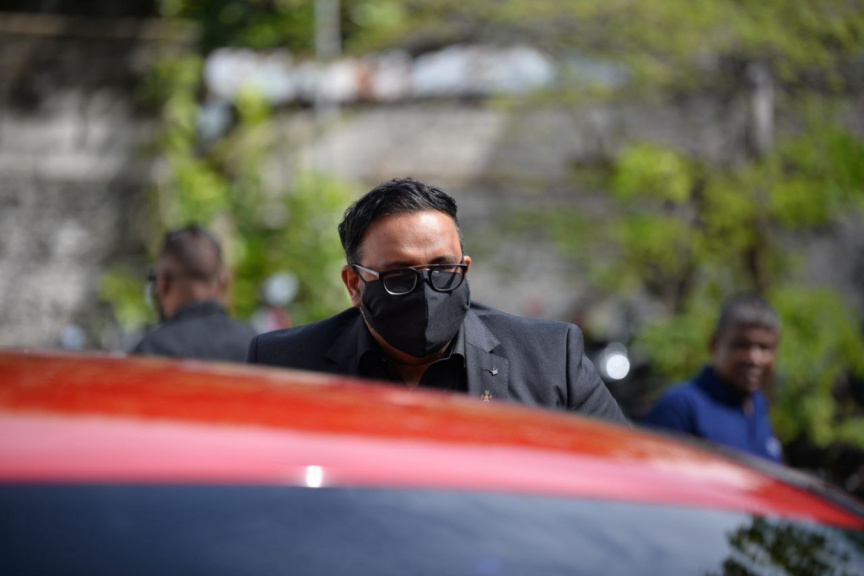 The High Court, on Thursday, issued an order to have former Vice President Ahmed Adeeb Abdul Gafoor detained in a remand jail pending the outcome of the appeal proceedings over the decision to throw out the charges against him.

Seven charges pressed against Adeeb in connection to the MMPRC graft case was thrown out of the Criminal Court on July 14. The decision has been appealed by the State at the High Court.

The High Court held to two appeal hearings in the case earlier this Thursday, during which the State filed a motion for a detainment order.

The first hearing was concluded after allowing Adeeb time to hire a lawyer. And the second hearing was held at 03:00 pm, which Adeeb attended accompanied by Mahfooz Saeed, who has represented Adeeb in previous cases.

Both sides presented detailed arguments over the detainment order request during the hearing.

Public Prosecutor Ahmed Naufal argued that there were reasonable grounds to believe that Adeeb may flee the country before the conclusion of the appeal, as he had previously fled the country despite a travel ban order, and had the means to flee the country without getting caught by the security services. He also said that Adeeb’s alleged crimes are major felonies.

He said that Adeeb’s case fall under the circumstances declared under Article 49 of the Constitution, and requested that he be kept detained under Article 199 (a) and (b) of the Criminal Procedure Code.

Meanwhile, Adeeb’s lawyer, Mahfooz noted that Adeeb had been previously allowed to conditional house arrest despite a court order to have him jailed pending the outcome of trial, and that it had been done by installing CCTV cameras outside Adeeb’s residence and by having Maldives Correctional Service’s officers  stand guard outside his residence.

Mahfooz argued that the decision to transfer Adeeb to house arrest had been based on the determination that the arrangement negated the opportunity for him to flee the country.

He argued that Adeeb may therefore not be detained under Article 199 of the Criminal Procedure Code.

Naufal counter-argued that Article 199 (a) of Criminal Procedure Code declares that decisions pertaining to the criminal liability of defendants may be appealed, and that Article 199 (b) of the Criminal Procedure Code declares that orders for detainment pending outcome of appeal hearings may be requested in response to such cases. He said the State finds the decision to throw out the charges against Adeeb from the Criminal Court to be a decision that Adeeb is not criminally liable.

Naufal said that the CCTV cameras and the officers at Adeeb’s residence were at his own request, and that he may call off the arrangement at any moment.

Mahfooz responded that the statement suggests that the State also believes there to be no longer any grounds to believe Adeeb may flee, which Naufal denied.

Naufal said that the previous house arrest arrangement wasn’t made at the State’s request, but that the decision was made by Maldives Correctional Service, with the authority vested in the institution through the Prison and Parole Act.

Adeeb made his own statement at the hearing. He said that he had already served time for fleeing the country in the past, and that jailing him based on the likelihood he may flee again constituted to double jeopardy.

He also said that the argument by the State that he may flee the country wasn’t based on any intelligence report.

He next talked about his health issues. Adeeb said he served three years in Dhoonidhoo Prison for a previous conviction, during which time he underwent multiple health complications. He said that he uses a CPAP machine for sleep apnea, and asked that he be allowed to remain free pending the outcome of the appeal.

Following the presentation of the arguments from both sides, the bench adjourned for 30 minutes to deliberate.

The High Court found that sufficient arguments had not been presented from Adeeb’s side to believe lack of grounds for Adeeb to flee, in counter to the State’s argument of reasonable grounds to believe that he may flee.

The court said that Adeeb may continue to receive treatment for the health issues he mentioned even while in jail, under the Prisons and Parole Act.

The court also said that Adeeb is accused of committing major felonies, and that the State has submitted sufficient evidence against him.

The court therefore issued an order to have him detained in a remand jail pending the outcome of the appeal hearings, or until the court decides otherwise.

Former VP Adeeb had been pressed with seven charges based on the investigation into the MMPRC embezzlement case conducted by Maldives Police Service, Anti-Corruption Commission, and Corruption and Asset Recovery Commission; charges of money laundering, embezzlement, graft and abuse of power.

The charges against Adeeb were invalid by Criminal Court judge Ismail Rasheed, during pre-trial proceedings to decide the validity of the plea bargain – which Adeeb told the court he had been forced to sign in exchange for medical furlough.

The Prosecutor General’s Office has lodged a case against the judge with the Judicial Service Commission (JSC) alleging judicial misconduct, and he has been placed under 60-day suspension as the commission investigates the allegations.