Dr. Niyaf: If mosques must be closed, so must the Parliament 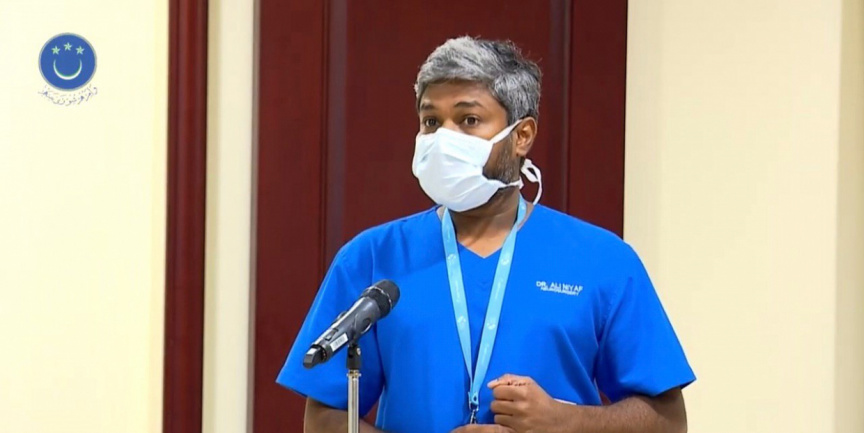 Dr. Ali Niyaf, a leading neurosurgeon, attends a public forum on amendments to the Public Health Act hosted by the Parliament on July 19, 2020.

Leading neurosurgeon Dr. Ali Niyaf questioned on Sunday why the Parliament should be allowed to remain open in public health emergencies where the acceleration of the spread of a disease requires the closure of mosques.

Niyaf, who serves as president of Maldives Medical Association, made the remark during a public forum hosted at the Parliament on Sunday night, regarding the amendments to Public Health Act to require public health emergency declarations to be submitted and approved by the Parliament within 48 hours.

He expressed concern over some of the proposed amendments, including the amendment which will allow parliamentary sittings to be held in accordance with standard protocols and in a location of choosing, even during public health emergencies.

Niyaf said he believes that if the spread of a disease requires the closure of mosques and halt to such a fundamental aspect of the Islamic faith, no one should be allowed to gather in once place for meetings without employing modern resources and in violation of the directive of health authorities.

“If a situation comes where mosques are halted, then there is no reason not to come to a situation where the Parliament must be halted,” he said.

He said that certain provisions of the bill undermine the authority of doctors and other professionals who are in charge of managing the situation when an epidemic turns into a pandemic and spreads across the globe.

“For example, if someone suffers a brain aneurysm, it’s a neurosurgeon or a neurologist who will know the best course of treatment,” he said.

Niyaf said he was not opposed to allowing the Parliament the authority to annul public health emergency declarations, for as long as it is stipulated that it must be done under the advisement of health experts.

“If this stipulation isn’t added, then this power, which is taken from one and given to another, will become a power which cannot control as a natural disaster spreads within a big country. I say this because I, for one, cannot accept that this be taken so lightly,” he said.

In response to Niyaf’s remarks, North Maafannu MP Imthiyaz Fahmy said the Constitution does not allow for the Parliament to be closed.

“Because they are elected by such a large number of people, and because they are charged with representing the people, make decisions and policies, the Constitution does not accommodate for the Parliament to be completely closed. I believe it’s because of the lack of room for it that Parliament also plays a part in state of emergencies declared by the President,” he said.

“Therefore, I believe there should always exist a role of the People’s Majlis. And looking at the provisions the law to declare public health emergencies, we are not talking about the Parliament making decisions on technical health matters. It also comes with economic implications and a whole range of other implications for the country. This includes legal issues, rights issues,” he said.

Imthiyaz said that state of emergencies constricts many constitutional rights, and that it when the role of the Parliament becomes important.

“I therefore believe this amendment will ease Niyaf’s concern,” he said.

Vilufushi MP Hassan Afeef said he accepted Niyaf’s concerns as that of a health expert, and that things will be done in accordance with the advice of health experts.

“The President will not declare a state of emergency amid a deadly epidemic without the advice of health experts or doctors,” he said.

He said there were many reasons why the Parliament should continue with its sitting during even during public health emergencies, but that the sittings will not be held without consulting with health experts.