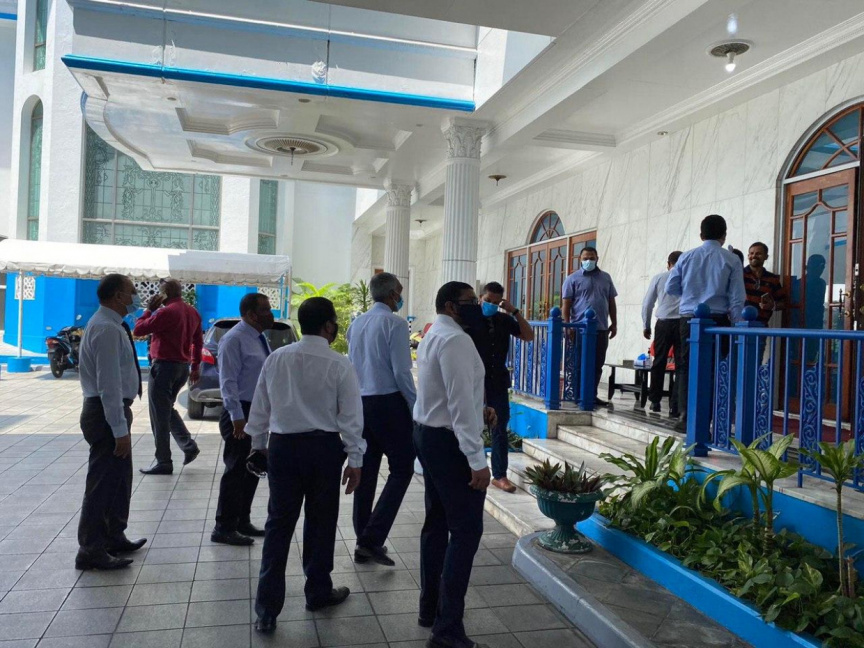 Opposition leaders arrive at the High Court in an attempt to meet the court's registrar on July 1, 2020. (Photo/PPM)

Opposition leaders went to the High Court on Wednesday over the delay in scheduling appeal proceedings over the five-year sentence issued against former President Abdulla Yameen Abdul Gayoom, but walked out empty-handed after they were denied a meeting with the court’s registrar.

Yameen, the leader of the opposition, was sentenced to five years in prison and fined USD 5 million (MVR 77 million) for money laundering in December last year.

The sentence was appealed on his behalf at the High Court last year, and while appeal proceedings began at the court this year, no hearings have been scheduled since the coronavirus restrictions in the greater Male’ region.

Leaders of the opposition coalition composed of Progressive Party of Maldives (PPM) and People’s National Congress (PNC) went to the High Court over the delay in appeal proceedings on Wednesday.

Exiting the courthouse after approximately one hour, PNC leader Abdul Raheem Abdulla said they were made to wait without a response from the court for half an hour.

“We weren’t able to meet the registrar. They said that according to court policy, he can only meet the appellant or respondant, or that the other option is that he can meet the lawyers in accordance with the proper procedure. And that that too can only be done by filing a letter with the court, and only if the procedures allow it – they responded in this manner,” said Abdul Raheem.

Abdul Raheem said that Yameen is no ordinary citizen, but the country’s opposition leader and former President.

He said the opposition therefore feels it has a responsibility to seek answers to the delay in justice.

The High Court, in response to the letter sent by the opposition requesting a meeting with the court’s registrar, said it is unable to honor their request as the High Court’s chief judge has advised it’s against the court’s policy to divulge information regarding specific cases unless it is either the appellant or the respondent themselves.

Yameen’s last appeal hearing, which took place on March 5, was adjourned with the announcement that the next hearing would be held on March 22. However, the hearing was cancelled following the order o close government offices.

Yameen was found guilty of laundering USD 1 million in misappropriated State funds - the acquisition cost for G. A. Vodamula which should have gone into Maldives Marketing and Public Relations Corporation (MMPRC).