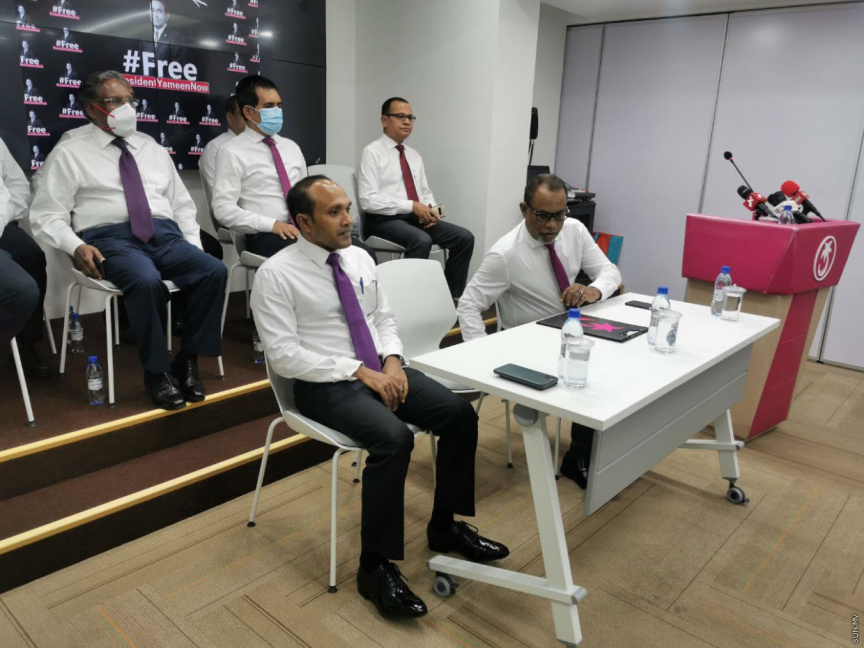 Former Vice President of the Maldives Dr. Mohamed Jameel Ahmed has signed for the main opposition party of the coalition PPM.

Dr. Jameel signed for PPM in a ceremony held at M. Dhiyamathi tonight where ti was announced that he would be serving as an advisor of the opposition coalition parties PPM and PNC

Dr. Jamee served as the Vice-President of the administration of President Yameen. He was a member of the governing coalition party Jumhooree Party (JP) before the switch to PPM. He had served as an advisor to JP leader Qasim Ibrahim.

Speaking at the ceremony to join PPM, Dr. Jameel criticized the current administration immensely. He said that it was not acceptable that a former President of the country was in jail for him, referring to former President Yameen. Dr. Jameel said that Yameen was the solution to the current problems of the country which could only be resolved by electing him as president in 2023, in the next presidential elections

Dr. Jmaeel ran as the running mate of Yameen during the last elections.

He also announced that he would do everything possible to free Yameen who was convicted of money laundering in December 2019. Opposition parties have always maintained that the trial was a politically motivated sham.

Dr. Jameel who is also an attorney represented Yameen during that trial. He had contested unsuccessfully for the Vilimale' district during the last Parliamentary elections. He left JP after the elections before joining opposition activities.

Dr. Jameel was dismissed as vice-president due to a dispute between him and Yameen by the PPM majority parliament. Dr. Jameel had then worked against Yameen after departing from the Maldives. He also served as the leader of the Maldives United Opposition (MUO) which was created against Yameen.

Dr. Jameel is an experienced figure in government affairs, having served in cabinet posts during Presidents Maumoon, Nasheed and Waheed's terms.