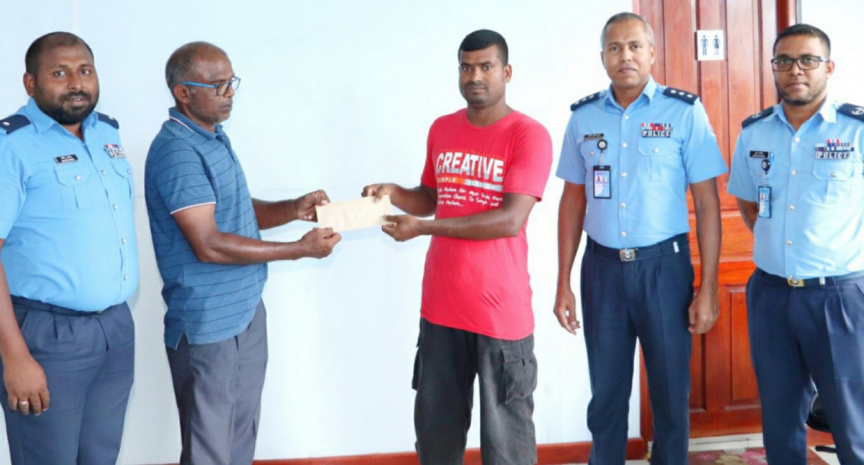 The Hithadhoo Police Station, on Wednesday, presented a certificate of appreciation to a Bangladeshi worker who handed over MVR 100,000 in cash he found lying on the road earlier this week, in a ceremony to celebrate his honesty and integrity.

MD Kamal Hosain, a Bangladeshi worker who lives in Hithadhoo, Addu City, found the cash lying on a road in the island on Friday morning.

He immediately handed over the cash to the Hithadhoo Police Station.

The Hithadhoo Police Station held a ceremony to celebrate Kamal’s honesty and integrity on Wednesday, during which he was presented with a certificate of appreciation and a gift from the Commander of the South Police Division, Chief Inspector of Police Ameen Abdul Gayoom.

The police had successfully located the rightful owner of the cash, Ali Abdul Sattar, who runs a teashop in Hithadhoo, the next day.

Ali Abdul Sattar expressed his appreciation towards Kamal by presenting him with a cash prize, and offering him a month of free meals from his teashop.

He also promised to offer employment to Kamal if he ever lost his job.

In a similar incident in January, a Maldivian man handed over a wallet he found lying on a road in Male’ City to the police. The wallet contained MVR 25,000 and 1,425 Bangladeshi Taka, and the police confirmed it belonged to a Bangladeshi worker.