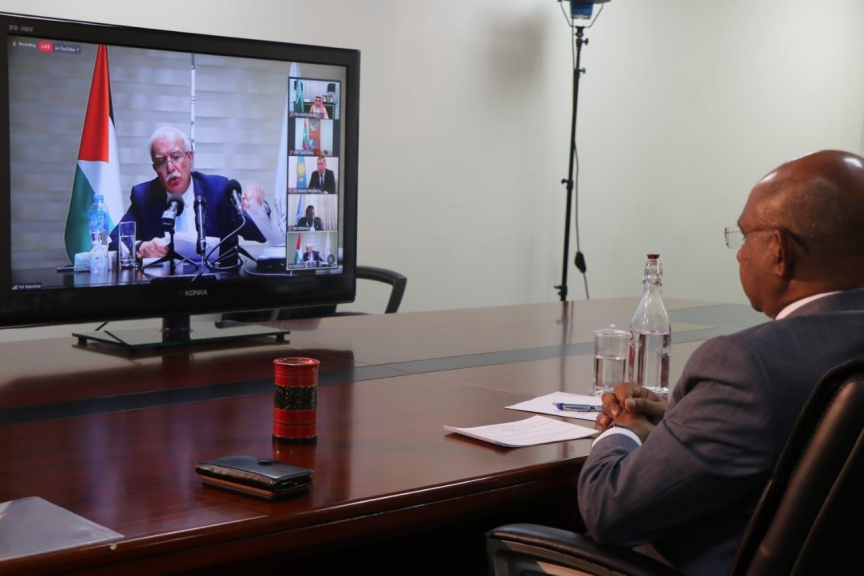 The statements by the Maldives was made by Minister of Foreign Affairs, Abdulla Shahid, as he participated in the Open-Ended Virtual Extraordinary Meeting of the Organization of Islamic Cooperation (OIC) Executive Committee at the Level of Foreign Ministers today.

The meeting, chaired by the Kingdom of Saudi Arabia, brought together Foreign Ministers of the OIC to discuss the Israeli Government’s proposal to annex large parts of the occupied West Bank in the State of Palestine.

In the meeting, the Minister said that the Maldives strongly condemns and rejects proposed Israeli annexation of large parts of the Occupied Palestinian Territory

Minister Shahid stated that the proposed Israeli annexation of the West Bank is the latest in a series of steps taken by Israel that would destabilize regional peace and security.

He conveyed the Maldives’ firm condemnation and rejection of the Israeli Government’s plans to annex large parts of the occupied West Bank.

He further said that the move increases the suffering and existing vulnerabilities of Palestinian people as the whole world is occupied with its response to COVID-19.

Minister Shahid stated that the annexation goes against a rules-based international order and undermines respect for international law.

He also called on the international community to do more to ensure that international law is upheld and the relevant United Nations resolutions are implemented to end the illegal occupation of Palestinian lands and prevent further unlawful settlements.

Furthermore, Minister Shahid reiterated the Maldives’ long-standing position of restoring the Palestinian people’s right to self-determination by ensuring an independent and sovereign State of Palestine, based on the 1967 borders, with East Jerusalem as its capital.

He described the unilateral and unlawful plans to annex occupied Palestinian Territory as diminishing any hopes of a two-state solution, which can only be achieved from negotiations in good faith.

The meeting concluded with the adoption of a resolution by the Executive Committee of the OIC condemning the threats of the Israeli Government to annex parts of the State of Palestine’s territory occupied in 1967.

The Organization of Islamic Cooperation, comprising of 57 Member States, has constantly advocated for the rights of Palestinian people and a two-state solution. The Maldives has been an active member of the OIC since becoming a member in 1976.