Parliament plays video of Bonde getting beat up by riot police 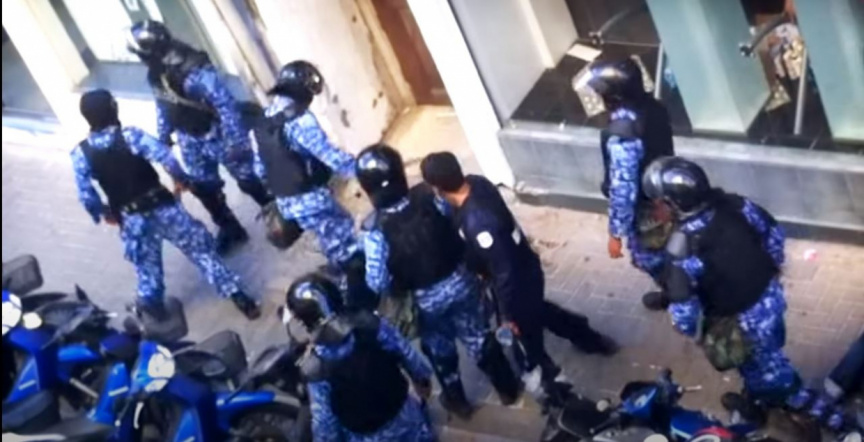 Screen grab from the video footage of Ibrahim Rasheed (Bonde) getting beat up by riot police on February 8, 2012.

The Parliament, on Tuesday, played a video of Ibrahim Rasheed (Bonde), who now serves as the parliamentary representative for the Central Maafannu constituency, getting beat up by riot police in 2012.

The video, which was taken during the police crackdown on protestors on February 8, 2012, was played inside the Parliament’s chambers at the request of Deputy Speaker Eva Abdulla.

Eva, who serves as the parliamentary representative for North Galolhu constituency, made the request during the debate on the Police Service Bill.

Speaking during the debate, Eva highlighted on the attack on Ibrahim Rasheed. She said that while she did not wish to liken the incident to the killing of George Floyd, brutality meant brutality.

George Floyd was an African American man who died after a police officer kneeled on his neck for several minutes outside a shop in Minneapolis on May 25. The killing has sparked protests not just in the United States, but across the globe.

Eva said that acts on police brutality, no matter how big or small, must be addressed.

“I am not comparing the injuries he suffered on that day to the injuries which George Floyd suffered. We all saw the attack on Ibrahim Rasheed on February 8, 2012. I believe the Secretariat of the Parliament will have this video. I want to re-watch that video today,” said Eva.

In response, Parliament Speaker, former President Mohamed Nasheed – whose ousting had sparked the protests – said that the Parliament’s Standing Orders allowed the video to be viewed inside the chambers, if she was so inclined.

Eva asked that the video be played inside the chambers.

The video was played when the Parliament reconvened after recess at 10:30 am.

Before playing the video, Nasheed said that it would be beneficial to watch the video.

Eva said she wished to watch the video because the police officers involved had never officially confessed to it, nor apologized.

She said that everyone was pretending like it never happened, despite clear evidence otherwise.

“And for as long as they fail to issue an official apology for their brutality, we are pretending like it never happened,” said Eva.

She said that police officers had brutalized the Maldivian people in prisons and in the street, irrespective of whether the victims were politicians or private citizens.

She said that Maldives had a culture of police brutality.