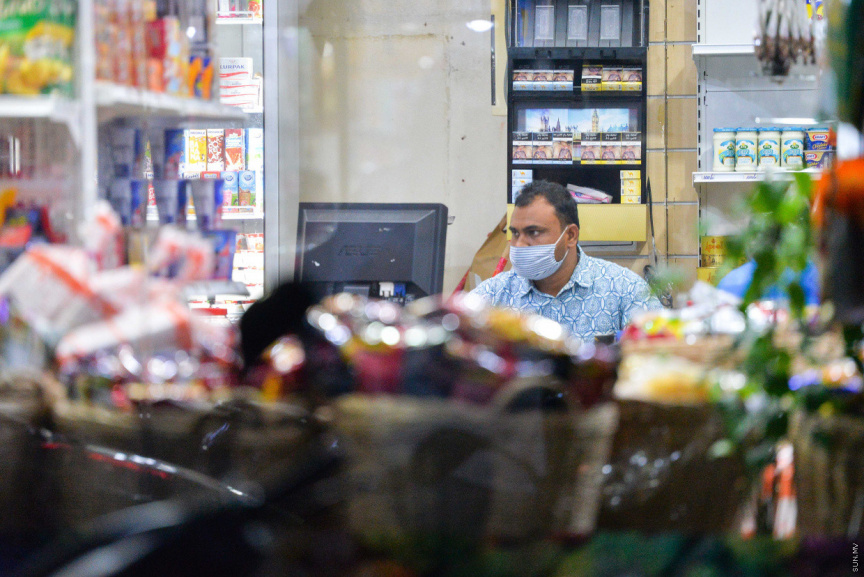 A shop keeper wears a mask to protect from the spread of the new coronavirus as he waits for customers inside a grocery store in Male' City on May 27, 2020. (Sun Photo/Fayaz Moosa)

Male’ City Council, on Tuesday, announced it has received applications from 2,090 companies requesting permits to reopen businesses during the first phase of lockdown easement.

The first phase of the easement of the city-wide lockdown in the capital allows for more businesses to reopen.

Male’ City Council, in an announcement via its official Twitter account on Tuesday night, said that the council, from May 29 to June 2, received applications to reopen 17 categories of businesses via its virtual platform.

According to the council, it received 3,480 applications from 2,090 companies. Applications for permits to individual employees amount to 9,207.

Male’ City Council announced the applications have been shared with the Economic Development Ministry, and that it expects to complete the verification process and begin issuing the permits through Maldives Police Service this Wednesday.

Business permits had previously been issued directly through Maldives Police Service. And Assistant Commissioner of Police Ismail Naveen, during a press conference at the National Emergency Operations Center (NEOC) last week, said that permits issued prior to the first phase of the easement of the lockdown, which began on May 29, will remain valid.

The populous Male’ City has since become the epicenter of the coronavirus outbreak in the country, contributing to over 90 percent of the total cases.

While 1,841 people are confirmed to have contracted the new coronavirus in Maldives, this includes 608 people who have since made full recoveries. Seven have died from complications.