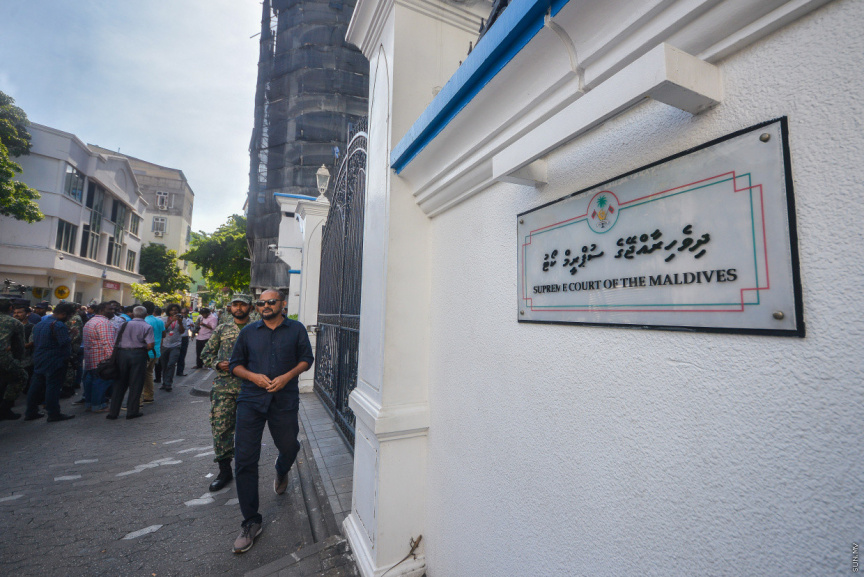 The Supreme Court of Maldives has recommended to the Parliament to amend the constitution with two options of a transitional article regarding the extension of existing councilors.

Divisions have been created in the governing party MDP’s MPs over how to extend the terms of councilors, despite the bill proposed to amend the constitution. The Attorney General Ibrahim Riffath and Parliament’s Counselor-General Fathimath Filza have both advised that amending the constitution is the only option.

Parliament was unable to reach a unanimous agreement that a constitutional amendment to extend the term of incumbent island councilors, atoll councilors and city councilors were the only solution to the legal vacuum which the country will face once the term of the councilors expire until new councilors are elected.

Parliament then requested the Supreme Court’s opinion regarding the legal procedures to fill the vacuum in the law by extending the terms of existing councilors and the issues that could arise from such a move.

The top court of Maldives today, issued its advisory opinion on the matter. The advisory opinion read that there were no exceptions to be made in arranging a system for the administrative districts of the country to be run under the constitution, until new councilors are appointed due to the fact that, on June 3, the current terms of councilors will lapse and they will no longer remain in their posts constitutionally from then on.

The Supreme Court also stated that according to the Constitution, the arrangements must be made in a manner that would not bring about any contradictions with the other articles of the constitution.

The advice issued unanimously by the Supreme Court today read that the Constitution’s Article 231 (A) stipulated that the members of councils for decentralized administration are to be democratically elected by secret ballot by their respective communities.

The advice read that any arrangements made for the legal vacuum should not contradict with this article. It means that the arrangements should ensure that the administrative districts are to be run democratically elected members through a secret ballot by their respective communities.

Since the Constitution clearly states that the Maldives is a democratically run country, this can only be ensured when the state is administered by representatives elected by the public through an independent ballot in a stipulated time.

The Constitution’s Article 231 (C) also clearly stipulates that the term of councils elected to administer the constituencies shall not exceed three years. This was an amendment ratified in December of last year.

The constitution can be amended in this instance

The Supreme Court recommended two options to resolve if circumstances not within the powers of humans result in the failure to elect representatives as stipulated in the Constitution.

The next approach was by adding a transitional clause to Chapter 13 of the Constitution which deals with the application and construction of the Constitution. The clause added will be in effect until the next local council elections which also accomplishes the same purpose as the amendment to Article 231.

The Supreme Court advised that it did not view the possible void that could be formed in the law by the expiration of current councilors' terms to be filled with the current amendment proposed by the Parliament.

With the advisory opinion of the Supreme Court, Parliament has scheduled a session for tonight.

Speaker of the Parliament Mohamed Nasheed had stated in the 41st Parliamentary session on Wednesday, that he was not ending that session, but merely a brief break until the Supreme Court’s advisory opinion was issued.

Hearings in petition over President pay cut to begin

SC to accept case regarding validity of MP's seat