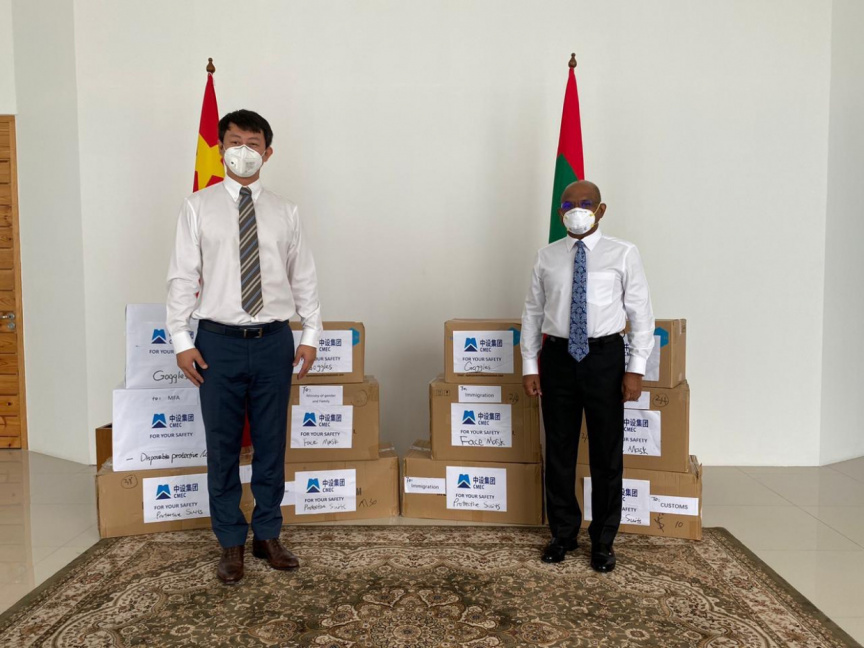 General Representative of CMEC in Maldives, Liu Xiaoda presents a donation of PPEs and other medical equipment to the Maldivian Foreign Minister Abdulla Shahid in a ceremony held at the Foreign Ministry headquarters on May 21, 2020. (Photo/Foreign Ministry)

China Machinery Engineering Corporation (CMEC), on Thursday, donated PPEs and other protective equipment to several Maldivian institutions involved in efforts to curb the spread of the new coronavirus in Maldives.

The donation was presented by General Representative of CMEC in Maldives Liu Xiaoda to the Maldivian Foreign Minister Abdulla Shahid in a ceremony held at the Foreign Ministry headquarters on Thursday afternoon.

According to the Foreign Ministry, the equipment donated by CMEC includes PPEs, face masks and protective goggles.

The donations were for Foreign Ministry itself, as well as Gender Ministry, Maldives Customs Services, and Maldives Immigration.

CMEC is also scheduled to bring in an additional shipment of donations for the people in need who have been provided shelter by Gender Ministry next week.

The company had also constructed toilet blocks in the Farukolhufushi isolation facility.

It was also among several Chinese companies which donated a large shipment of medical equipment to Maldives in early May.

'Scholarships will not be affected by pandemic'