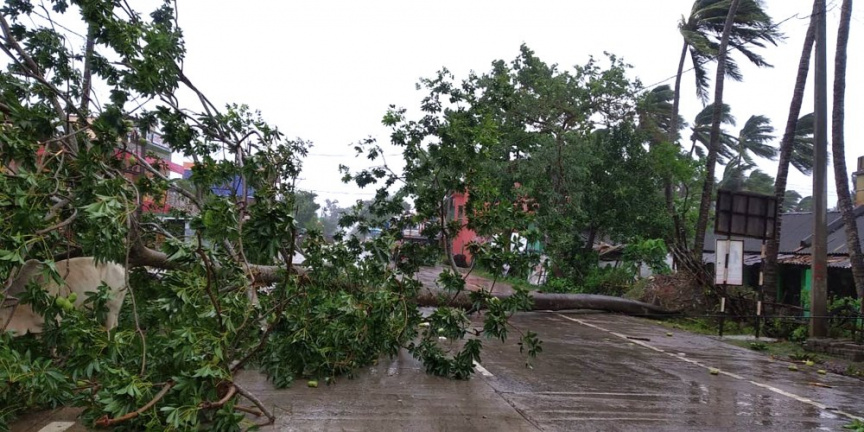 Trees lie uprooted on a highway from heavy winds ahead of Cyclone Amphan landfall, at Chandbali on the Bay of Bengal coast in Orissa, India, Wednesday, May 20, 2020. (AP Photo)

NEW DELHI (AP) — A powerful cyclone began dumping rain on coastal India and Bangladesh early Wednesday as more than 2 million people were being moved to shelters before the storm hits land in the afternoon.

Cyclone Amphan slowed slightly as it reached cooler waters near the coast. But with wind speeds ranging between 160 and 170 kilometers per hour (100 and 105 miles per hour), the storm could cause extensive damage: winds and heavy rain battering flimsy houses, a storm surge that may push seawater 25 kilometers (15 miles) inland and the possibility of flooding in crowded cities like Kolkata.

Videos and photos showed residents heading to shelters, some carrying bags with their belongings and all wearing masks to protect against the coronavirus. Officials went from village to village with loudspeakers warning people to take shelter.

The highest level of alert was raised in Bangladesh at 6 a.m., said Junior Minister for Disaster Management and Relief Enamur Rahman.

In Sathira district in Bangladesh, local chief government administrator S.M. Mostafa Kamal said evacuees were given dry food, baby food and medicine. He said they were distributing masks and other safety equipment to keep coronavirus from spreading during their stay in thousands of shelters.

The cyclone is occurring during the Islamic holy month Ramadan, and reports from Muslim-majority Bangladesh said many villagers were fasting all day Tuesday, then eating at night before heading for the shelters early Wednesday.

The region is no stranger to devastating cyclones. But it is not the frequency of these cyclones, but the intensity of their wind speeds that have increased due to climate change and warming, said K.J. Ramesh, former chief of India’s meteorological department.

This has to do with the temperature of the sea’s surface. Warm water is the fuel for cyclones. It is where storms get their energy and the amount of heat trapped in the top 700 meters of the ocean has increased. “As a result, cyclones are intensifying faster than before,” he said.