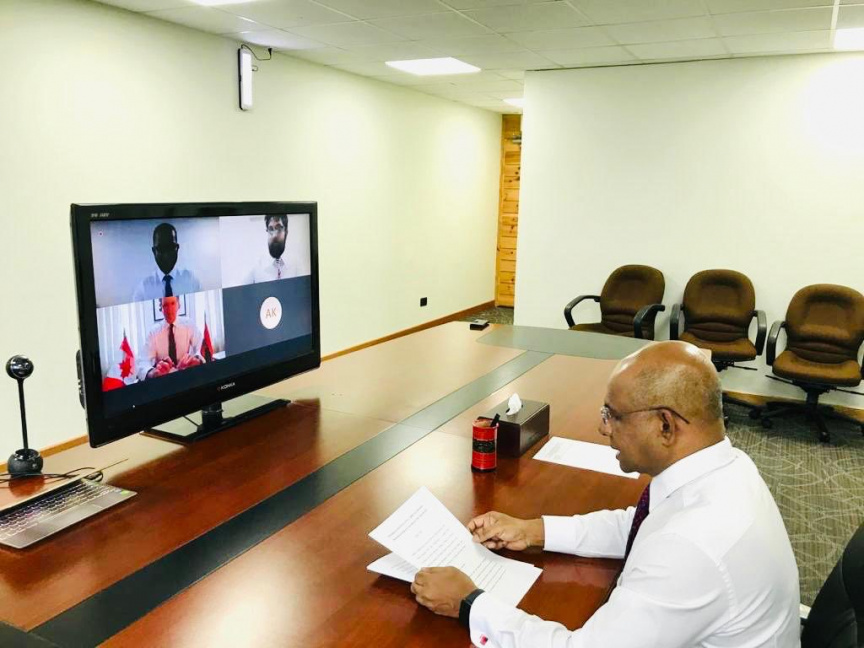 Foreign Minister Abdulla Shahid is photographed during a virtual meeting with Canadian High Commissioner David McKinnon. The two countries signed an aid agreement of MVR 1 million on May 18, 2020. (Photo/Foreign Ministry)

The government of Canada has provided the Maldives with MVR 1 million to assist government efforts to help those in dire conditions due to COVID-19.

The aid agreement was signed between the two nations during a virtual ceremony held today. Canadian High Commissioner appointed to the Maldives David McKinnon. Foreign Minister Abdulla Shahid signed the agreement on behalf of the Maldives.

Canadian High Commissioner @McKinnonDavid and I signed agreement for MVR 1 million to support Govt in providing basic services to the homeless and vulnerable communities in Male’. I thank Foreign Minister @FP_Champagne and Govt of Canada for this timely assistance. pic.twitter.com/eHOzj8JB9W

Gender Ministry is working with the government to establish shelters for those in dire conditions in the Maldives. The government will assist 400 such individuals as part of the efforts.

Foreign Minister Abdulla Shahid thanked the assistance provided by the Canadian government which exemplified the initiative taken by the country in helping others in need.

High Commissioner David McKinnon also spoke at the ceremony and praised the Maldivian government in its efforts to help those in need without any distinction.