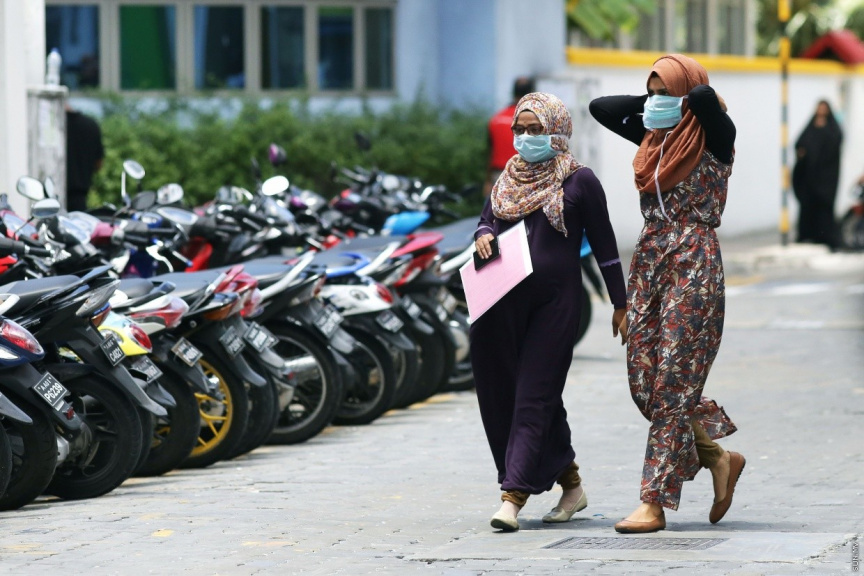 Women secure masks over their faces as they walk towards the Indhira Gandhi Memorial Hospital (IGMH) in Male' City. (File Photo/Sun/Fayaz MoosA)

National Emergency Operations Center, on Saturday, announced that a child who was recently born to a COVID-19 patient had tested negative for the disease.

The woman in question had given birth to her child via C-section at the Tree Top Hospital on Tuesday, May 12.

A family member told Sun that both the mother and infant were doing well, and that the doctors said they planned on discharging the infant.

All of the woman’s contacts had also tested negative, including her husband and the doctors and nurses who attended to her when she was hospitalized.

The family believes the test results to be a false positive, and have asked the health authorities to conduct additional tests in order to confirm the results.

The woman had been initially hospitalized at Indhira Gandhi Memorial Hospital (IGMH) after going into labor on May 2. She had tested positive for COVID-19 during routine testing conducted by IGMH for all hospitalized patients on May 5, after which she was transferred to Tree Top Hospital in suburban Hulhumale’. She had given birth via C-section on May 12.

At a previous NEOC press briefing, spokesperson Mabrouq Azeez had said that a second test will be conducted to confirm the results 14 days after the first test.

This means the woman will undergo the second test on May 19.

She said that the case was linked with a previously confirmed case, and the health authorities were working on testing the infant’s mother for the disease.

The youngest child who had previously been recorded to have tested positive was a seven month infant. Other members of the infant’s family also later tested positive.

1,078 people have tested positive for COVID-19 in Maldives. 49 have since recovered and four have died from complications.