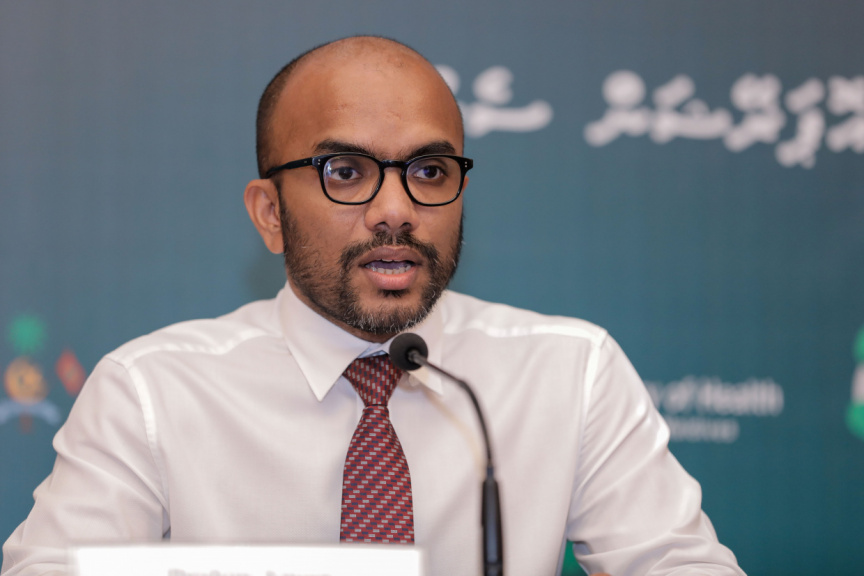 Finance Minister, Ibrahim Ameer, on Thursday, announced the decision to impose further cuts on the salary of government employees.

Ameer made the announcement at a National Emergency Operations Center press briefing on Thursday afternoon, for which he appeared alongside Economic Minister Fayyaz Ismail.

Ameer said the government made the decision because it did not project its income to improve, but projected its financial standing to deteriorate further.

“There will be no changes to the salaries of employees who are paid their salary by the State who earn under MVR 20,000. Employees who earn between MVR 20,000 to MVR 25,000 will undergo a 20 percent cut to their basic salary,” he said.

Ameer said that those who fell within the category were permanent secretaries appointed to government ministries, consultants, some contract employees, and senior employees of independent commissions.

The government had previously imposed a 20 percent pay cut on employees above deputy minister level.

Ameer said the government had also decided to cap the take home salary or net salary of all government employees.

He said the decision was made to reduce expenditure in order to manage government cashflow.

Ameer said that while the salary cut would be imposed on basic salary, some sometimes earned above MVR 25,000 after adding allowances, and that the net salary of those who earned a basic salary below MVR 10,000 would be capped at MR 25,000.

The government has now imposed a 22 percent cut on their basic salary, and ceased paying the MVR 11,000 board allowance altogether, he said.

Ameer said the changes would result in an overall 32 percent reduction in their salary.

He said the changes were expected to save MVR 15 million in monthly government expenditure.