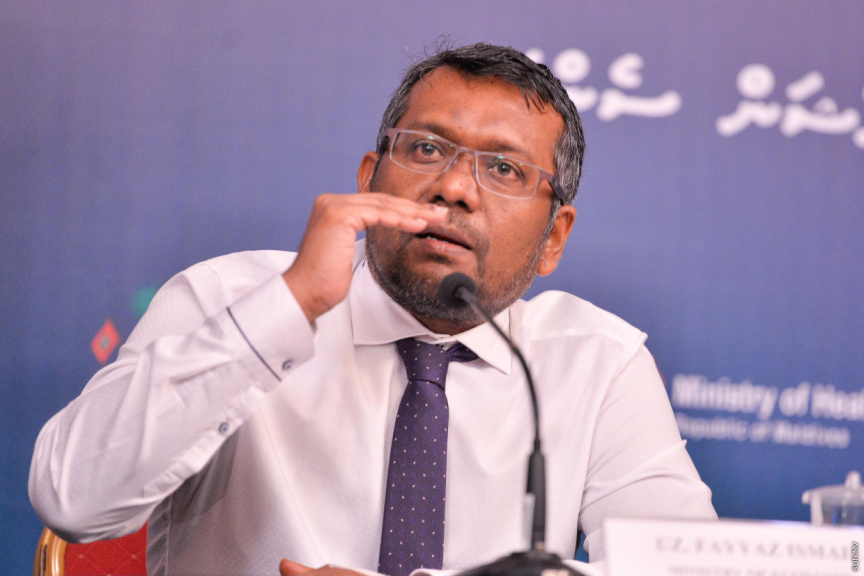 April 11, 2020: Maldivian Economic Minister Fayyaz Ismail said that he does not believe the country will face shortages in food supplies amid the situation with the global Covid-19 pandemic. (Sun Photo/Fayaz Moosa)

Maldivian Economic Minister Fayyaz Ismail has said that he does not believe the country will face shortages in food supplies amid the situation with the global Covid-19 pandemic.

Minister Fayyaz was speaking in a news conference last night when he stated his belief that the country will be safe from a famine. The minister did, however, admit that the country’s economy would inevitably suffer the consequences of the virus.

The current situation with the virus was merely temporary, according to the Minister.

“When we speak about food security, I don’t believe right now that we will face a situation of famine. If the world is faced with such a situation, so will we. There is nothing that can be done,”

“Workers in the manufacturing and agriculture industry would keep on working despite the negative impacts on the world economy. The situation of lockdown right now is viewed as a temporary one by all countries. They control and reopen.” said Minister Fayyaz.

The Minister also stated that the government had ensured the supply of essential goods for a year, which was being fulfilled, and noted that some members of the public were wasting money by unnecessarily stocking up on staple goods.

“We have repeatedly said that we will not face a shortage of staple goods; not to buy and store foods sack by sack in your living rooms., but still many are doing so. (They are) locking up the money they have,”

“Because we are sure, we are saying that we will not allow the country to face a shortage of food items,” said Minister Fayyaz.

He also reminded that the development of agriculture was something targeted under the blue economic policy of the current administration and the work underway right now, is just speeding up the work.

“A program scheduled for later this year was sped up due to this (Covid-19). We believe that it was necessary to speed it up due to this situation. Many will gain the benefits from this by doing so in this situation and will pave the way for the economy to return.” said Fayyaz.

'Economy not strong enough for minimum wage to expats'