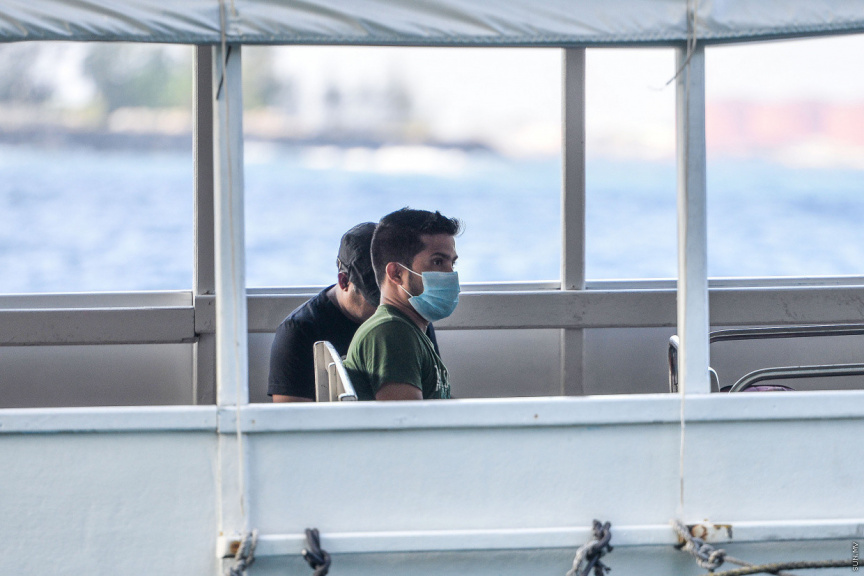 A passenger on a ferry wears a face mask. (File Photo/Sun/Fayaz Moosa)

The capital of Maldives, Male’ City is facing an influx of migrant resort workers who find themselves displaced following the closure of resorts amid the coronavirus pandemic, many of whom have resorted to going from shop to shop asking for employment.

Maldives suspended the issuance of on-arrival visa in a bid to prevent more COVID-19 cases in the country on March 27. Many resorts have suspended operations, and some have either laid off workers, put workers on no-pay leave, or imposed pay cuts.

Employees at some 18 resorts have finished observing the 14-day quarantine period counted from the date of the departure of the last tourist from the resorts, and have now been granted permission to travel out of the resort.

A shop owner in Male’ told Sun that a great number of displaced migrant resort workers had come to his shop begging for employment.

“They came here and said they had yet to receive pay for the last two months. They said they were uncertain as to whether they will have their jobs waiting at the resorts. They requested employment at the shop. They said they were willing to do any sort of job, and begged me,” said the man, who owns a shop located in Majeedhee Magu.

He said that seven displaced workers had come to his shop begging for employment yesterday and today.

Another shop owner, who told a similar story, said that it was clear the displaced workers did not even have a place to sleep.

He said that some displaced workers, when they were told there were no job openings, were desperately asking for money.

“A migrant worker who came today said he did not have a place to sleep and nothing to eat. He asked that I give him money, even as little as MVR 20 if possible,” said the shop owner.

A survey conducted by Tourism Employees Association of Maldives (TEAM), a non-profit which advocates for the rights of resort workers, shows that some 11,000 resort workers have been forced into no-pay leave.