Minister: Teleclasses to be recommenced, data allowances to be increased 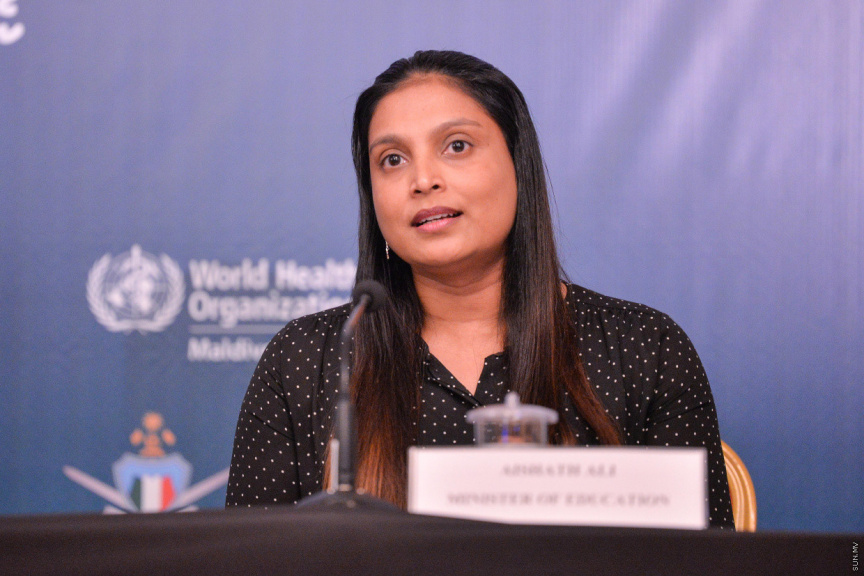 The education minister of Maldives Dr. Aishath Ali has announced that studies will recommence in the form of teleclasses for all grades in schools across the country.

The Minister was speaking in a news conference last night when she stated that teleclasses would once again recommence for grades from 7 to 11.

“We will begin teleclasses for key stages one and two next Sunday. That is for grades 1, 2, 3, 4, 5 and 6. For foundation students that are LKG and UKG, learning packs are arranged, these are clay-based packs that can be conducted at home with parents.” said the Minister.

Previously classes were held for key stages one and two via google classrooms.

Soap to be made available in all classrooms

The Minister also announced that the Ministry was working to arrange so that hygiene products such as soap will be available in all classrooms as the country goes into the third week since the closure of schools. Dr. Aishath Ali stated a lot of work was being conducted for the day when schools can be reopened.

“Wash facilities in all schools have been established for when we return from this to a situation where schools can be reopened. We have also received soap so that it can be available from classrooms with the assistance of UNICEF, and we are now working to send these products to schools.” said the Minister.

Work to build up the capacity of counselors in schools are also being conducted since the mental health of students and teachers would not be the same when they return from such a situation.

A monitoring mechanism for education

She also said that the ministry had decided to establish a monitoring mechanism to evaluate how much education a student receives.

A QR code is also used for collecting attendance in teleclasses and the data of student participation in classes were also being received which the Minister stated was very good.

The Minister then stated that the work to increase data allowances to students and teachers were also underway. Discussions for the purpose were now underway with internet service providers in the Maldives, according to the Minister.

She stated that currently each teacher and student would receive 5GB of data per month. To ensure that the data is being used for educational purposes, the Ministry had also tested some URLs such as google classrooms. Dhiraagu would be monitoring this, according to the Minister.

The Minister also thanked the UNICEF and World Bank for the assistance provided in the efforts to continue with education in the Maldives.