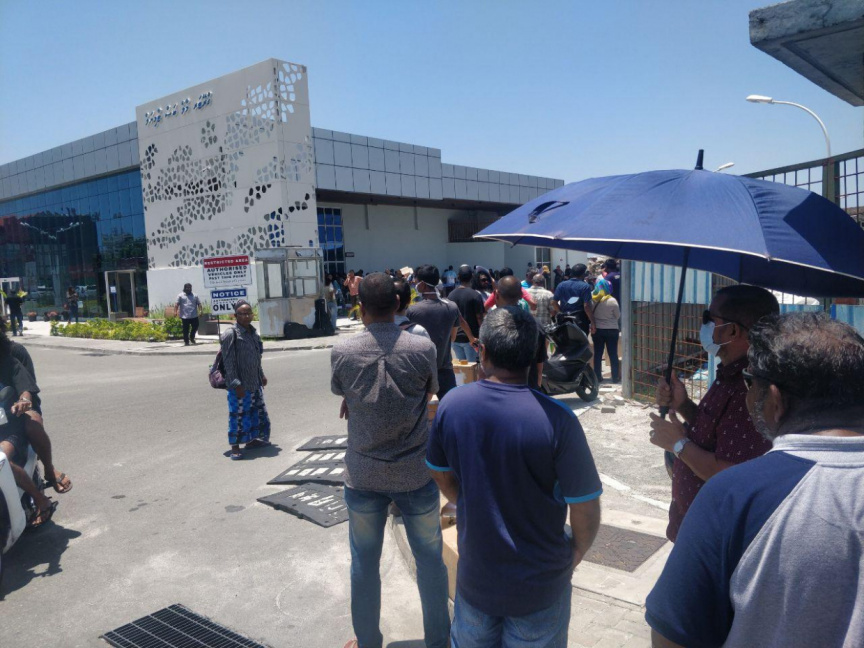 The Greater Male’ Bus Terminal, on Saturday, filled with people desperate to send care packages to their families in neighboring Sri Lanka.

The Maldivian government had announced the decision to allow care packages to be sent on board the national airline, Maldivian’s weekly cargo flight to the Sri Lankan capital, Colombo, on March 30.

The cargo flight to Colombo operates every Sunday. And families have been asked to deliver cargo packages to Maldivian’s city check-in office located in the Greater Male’ Bus Station from 9 am to 12 pm every Saturday.

This narrow window of time led to a large crowd to gather at the terminal this Saturday, a scene similar to last Thursday, when banks had reopened for a short three-hours amid the closure of government offices and banks.

Banks had later noted that many of the visits on Thursday had been unnecessary, as many of the services, including the deferral of loan payments, can be applied to online.

However, in contrast to Thursday, the crowd at the bus terminal, which was disorganized at first, later organized to a more manageable queue after people began to consciously distance themselves. Some stood holding boxes over their shoulders, while others waited with boxes placed in the pavement.

The queue at the bus terminal stretched as far as the MMDF base, Kalhuthukkala Koshi.

Foreign Ministry has instructed those who wish to send care packages to make online submissions before every Thursday.

The items which can be sent must be pharmaceutical products which aren’t available in Sri Lanka, and other essential products.

The weight of the care packages must be limited to 15 kilos per family.

ITEMS WHICH CAN BE SENT:

ITEMS WHICH CANNOT BE SENT:

Neighboring Sri Lanka hosts some 15,000 Maldivian nationals. It has closed its borders, and has imposed curfews to curb the spread of COVID-19.

Many Maldivian nationals who reside in Sri Lanka report the measures have resulted long queues outside shops to purchase even the most essential of products. They sometimes need to wait in queue for hours, and by the time they manage to enter the shop, the products they want are no longer available.

Maldivians in Bangadesh plead to be rescued