Friday sermon calls for an example of generosity in virus situation 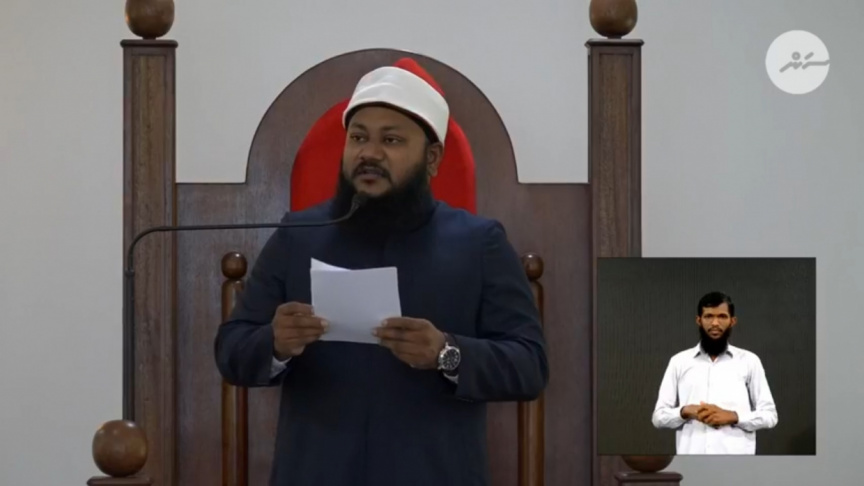 April 3, 2020: The Friday prayer in the island of Himmafushi was led by Sheikh Ali Zaid. Collective prayers in mosques in Male’ city were temporarily suspended in a bid to secure the capital from the pandemic virus Covid-19.

The Friday prayer sermons today called on the wealthy to set an exemplary standard of generosity to those who are less sufficient during the situation with the global pandemic.

Collective prayers in mosques in Male’ city have been temporarily suspended in a bid to secure the capital from the virus. Instead of the usual prayers, state media broadcast the Friday prayers in K. Himmafushi. The prayer on the island was led by Sheikh Ali Zaid.

The sermon today called for generosity and for the wealthy to show an example during the situation. The sermon cited a hadith by the Prophet Muhammed (SAW) that states that the biggest good deed was an act that brought happiness to the hearts of the Muslim brothers and sisters.

The sermon also called on people to limit wasteful spending during the situation and focus on individual responsibilities as well as to adhere to the advice of health professionals and authorities to overcome the situation.

Taking an example from the Prophet Muhammed, the sermon advised people to refrain from wasteful consumption of food items. The Prophet (PBUH) had stated that to keep one-third of the appetite free instead of eating full.

Countries across the world are taking stringent measures to prevent the spread of the virus which has affected the majority of countries. Advice includes not overspending and not hoarding on food supplies and essentials unnecessarily.

It is also advised not to purchase excessive amounts of medical equipment such as face masks and sanitizers. Some countries are now faced with shortages of such items which has led to calls by leading figures to the wealthy to assist the poor in this situation.