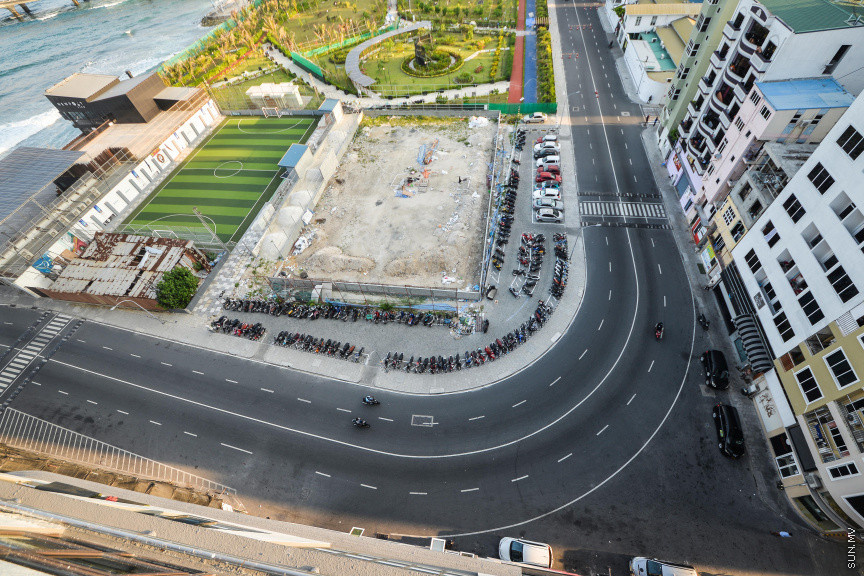 Photo shows the ring road of Male' city during an imposed curfew on April 2, 2020. The curfew was imposed as a safety measure against the Covid-19 virus. (Sun Photo/Fayaz Moosa)

The capital of Maldives, Male’ city experienced a rare occurrence yesterday. From 17:00 to 20:00, the roads of the bustling capital city remained dormant.

Except for Police officers and essential officials, the city was empty, with the remainder of the public, advised to stay home due to a curfew imposed by the government as a safety measure against the Covid-19 virus.

A city of almost 200,000 people, was brought to a standstill due to the measure. The time of the day is usually one of the busiest times of the day on the tiny narrow streets of the city.

Everyone, including those visiting the city to supply goods from islands, also remained onboard their vessels near the harbor to obey the order by the Director-General of Public Health. The shops also remained closed.

“We had to stop a few people, They all said that they were not aware that it was prohibited.” were the words of a Police officer patrolling the busiest road of the city, Majeedhee Magu during the curfew when we spoke to him.

Stringent measures such as the closure of schools, colleges, and universities as well as restaurants and cafés have been steadily imposed on the nation’s capital and the most populous city due to the situation with the virus. These measures were to encourage the public to remain indoors.

But the measures have not been fully effective, with many still heading out for a fresh air ride or walk in the evening. However, having said that, this was not the case yesterday.

“I am out here to shop for some essentials to prepare for the three hours (curfew imposed) indoors. I don’t usually spend time outdoors nowadays.” said a man we met in the market area of the city a few hours before the curfew.

The city finally takes a breather!

This is the first time the country has declared a public health emergency. However, the country has had curfews imposed previously during the administration of President Maumoon Abdul Gayoom. It was a measure against the protests held in 2004 against the government.

Most of the public is seen as taking the instructions of the government lightly in this situation with the virus. But not yesterday, the whole city obediently accepted the instructions.

After the curfew, it was revealed that police had stopped and advised 95 people who were out on the road during the curfew hours in a city of almost 200,000.

Commissioner of Police steps out to the streets!

One of the most noticeable sighs during the curfew was the Commissioner of Police, Mohamed Hameed, patrolling the streets with his junior ranked officers. Casually stopping people and advising them to head home.

The order by the Director-General will be in place until further notice. While the Maldives has confirmed 19 cases of the Covid-19 virus, it can be truly said that the country has successfully controlled the virus. 13 individuals have made full recoveries from the virus, while only four remain under treatment. The recovered are all foreigners, either tourists or resort workers.

Those under treatment are four locals who returned from the United Kingdom where the virus is spreading fast. Two Italian tourists had also departed from the country before receiving their test results. The tourists had departed after completing their quarantine periods. The results of the tests were later received as positive as they were en-route to Russia.

To completely overcome the situation with the virus, the government would still need the compliance of the public, just as much as during the curfew. The curfew yesterday was an exemplary act of unity by the residents of the capital.

Something that will be very much needed to overcome the global pandemic that reached one million cases worldwide late last night.