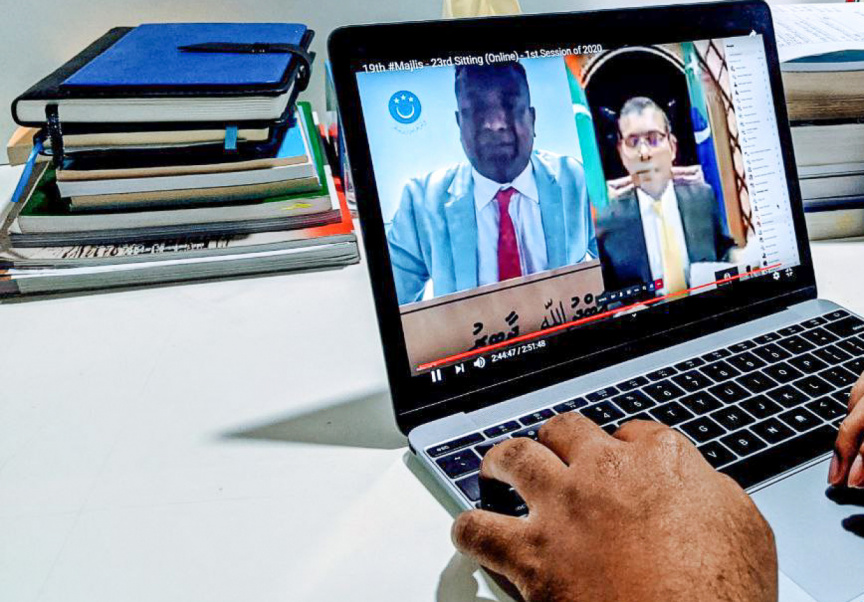 Parliaments across the world have been suspended amid the global pandemic of Covid-19 faced.

Countries are implementing stringent measures to ensure the safety of its citizens and to discourage public gatherings and promote social distancing. Working from home, online meetings have now been taken up by most offices as the go-to solution to keep on working.

Legislative bodies in some countries have been suspended without a date. Others have been working to implement ways to allow MPs to participate in votes via email and some parliaments have also been working to hold virtual sessions.

The Maldivian parliament has, however, leaped forward by being the first country and parliament to hold virtual sessions. The parliament held the first such session on March 29, 2020.

The world is faced with difficult days ahead due to the global pandemic and governments are taking measures with additional powers granted due to the situation. At a time like this, a body to oversee such actions is very much needed.

Maldivian Parliament’s Speaker and former president of the country, Mohamed Nasheed stated that in a delicate situation like this the parliament cannot stop functioning despite the power to suspend sessions being within his discretion.

“This is truly the most important time to run the state as a constitutional state.” Nasheed had said before a display of unity by stating that the government would have the full assistance of the parliament whenever required to deal with the situation.

The hard work to ensure this meant that virtual sessions for the parliament were arranged within just two weeks. MPs can now take part in sessions just as they would do by attending the parliament.

The first such session was also focused on the elephant in the room, the measures were taken against the Covid-19 in the Maldives and to reduce the negative impact stemming from the measures.

The parliament used the Microsoft Teams application to hold sessions and even spoke and voted on the issue. Since it was the first session, some hiccups occurred which will eventually drown out as the sessions go on, but in general, it could be described as an A+ session.

The parliament rolled up its sleeves for the sessions with tests conducted on Thursday and Saturday.

The online sessions have been gaining notice from other countries as well and the Inter-Parliamentary Union also noted how the session of the Maldivian Parliament was conducted.

Speaker of the Parliament Mohamed Nasheed even stated that the Maldives was ready to assist nations such UK and India with online sessions as well. He added that India and the UK’s House of Commons had assisted the Maldives in preparing for the sessions, a favor that the Maldives would be happy to return.

The online sessions were due to the hard work of parliament’s employees, including IT, Media and administrative staff, Nasheed noted during the first session.

This is in no means a small feat achieved by the Maldives. The sessions are an exemplary show of unity and resilience in the fight to curb the virus by one of the smallest nations in the world.