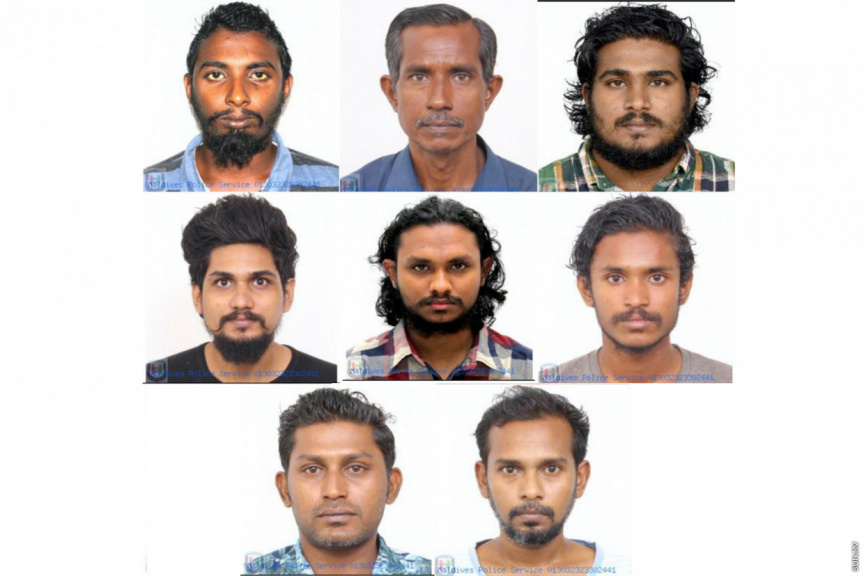 The eight suspects charged in connection to a major drug operation in Male' City on January 30, 2020. (Photo/Maldives Police Service)

The Prosecutor General’s Office, on Tuesday, announced that charges have been filed against eight of the nine people held in connection to a major drug operation run by the Drug Enforcement Department (DED) in collaboration with the Police Intel on January 30.

The operation involved raids of 10 properties in Male’ City, which uncovered over nine kilos of diamorphine (heroin), over four grams of cocaine, paraphernalia used to pack the drugs and ready it for distribution, and cash - believed to be made from sale of the drugs.

The police, under court order, also froze the accounts of nine people held in connection to the case. The sum total of the frozen money amounts to MVR 4.6 million.

The nine suspects arrested in connection to the case are:

The Prosecutor General’s Office, this Tuesday, announced that charges have been pressed with the Criminal Court against all suspect, with the exception of Mohamed Sidhurath.

Maldives Police Service previously disclosed that it believed Arshad Khalid to be the head of the drug trafficking network. He was released from police custody by the Criminal Court on Monday. A hearing to review the decision is scheduled at the court at 3 pm this Tuesday.