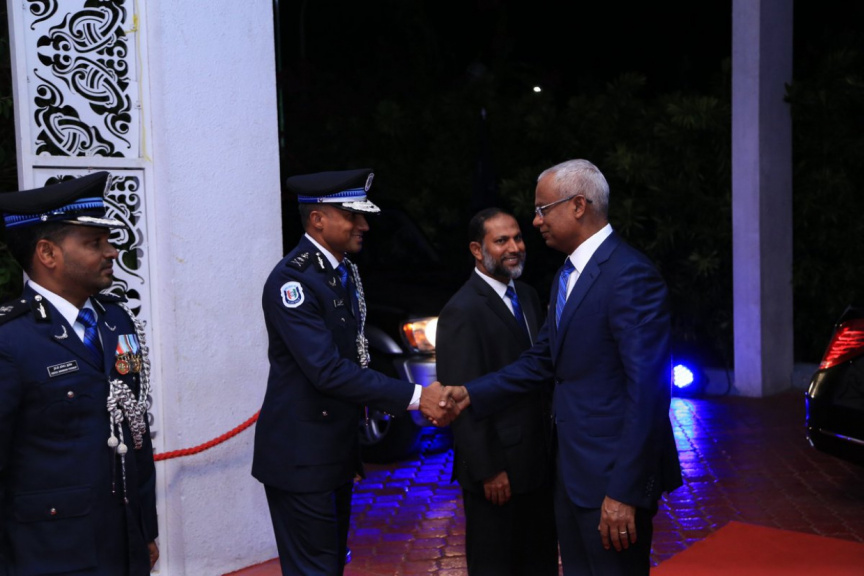 Parliamentarians have called for a revision to the policy on appointment and termination of Commissioner of Police to allow the President full rein over the decision making process.

The government has presented legislature to accommodate major amendments to the Police Service Act.

The bill states that the Commissioner of Police must be appointed by the President in accordance with the counsel of the Home Minister, based on a shortlist of candidates presented to the Home Minister following vetting by the Police Promotions Board.

During the debate on the bill, West Henveyru MP Hassan Latheef, who had submitted the bill behalf on the government, said that instead of authorizing a Board within the police to vet candidates, it was important that the President be given full rein over the decision on appointing the CP.

Deputy Speaker, North Galolhu MP Eva Abdulla also spoke in support of granting the President full rein over appointment of the CP. She said that it was important for the Head of the State to have control over the police, and that the potential consequences a lack of control over the police was evident in Maldivian history.

She that that the CP, if he became someone perpetually engaged in appeasing the police, would be rendered incapable of serving the public to the fullest.

She said that if the support of the police force became the basis of the appointment and continued service of a CP, the police would also be rendered partially incapable of upholding the rule of the State and the government.

“Therefore, I find it imperative that the President be authorized to make the appointment,” said Eva.

South Galolhu MP Mickail Naseem, too, said he was not in support of limiting the choices of the President regarding the appointment of a CP by authorizing the Police Promotions Board to conduct the vetting and shortlist candidates.

“The President should have the full authority and prerogative to appoint a Commissioner of Police,” said Mickail.

Following these remarks by prominent MDP parliamentarians, Thimarafushi MP Abdulla Riyaz, who had previously served as a CP himself, said that the CP had always been appointment, and the police had always been issued their orders, at the instructions of the President, from within the system that existed.

“And this is what the bill states. Therefore, it remains unclear to be based on this bill, as to what actually changes,” said Riyaz.

He said that he believed a board or an authority should exist within the police to make important decisions such as budgetary decisions and appointment of officials to top positions.

Ungoofaaru MP Mohamed Waheed, at this point, raised a point of order and interjected that Riyaz had been one of the leaders of the February 7 coup, and that he was debating on the bill without studying it first.

Other MDP parliamentarians also rose to call out Riyaz on his alleged lack of study of the bill.

Riyaz responded that he had gone over the bill more than once, and that he was raising questions because certain aspects still remained unclear.

Naifaru MP Ahmed Shiyam, the deputy leader of PPM, spoke against granting the President full authority to appoint the CP.

He said the move would increase political influence over the police force and undermine its integrity.

He called the bill “dangerous”, and suggested it be withdrawn.

Meanwhile, Maduvvari MP Adam Shareef Umar, the deputy leader of PNC, said he too, believed the full authority to appoint the CP should lay with the President.

“I personally believe, and looking at the current political arena, I believe the Commissioner of Police must be appointed by the President,” he said.

Shareef said that the bill did not grant the President discretionary powers, but that the President needed to have full control over the appointment of the CP for the proper execution of policies needed to maintain national security.