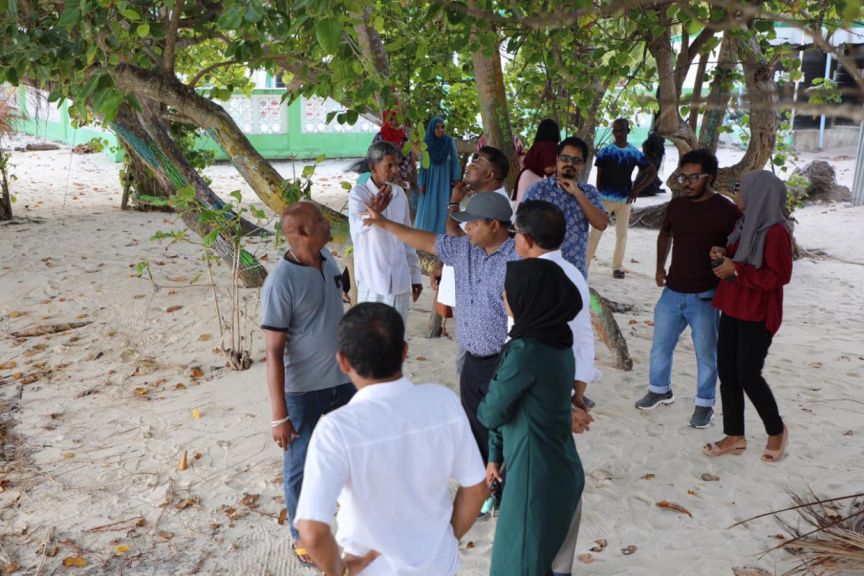 Environment Minister Dr. Hussain Rasheed Hassan had paid visits to V. Fulidhoo and V. Thinadhoo for firsthand assessments of the extent of the coastal erosion affecting the islands.

He engaged in discussions with the Fulidhoo Council regarding coastal erosion and other environmental challenges facing the island.

He also toured the coastal areas, along with the waste management area of the island.

Fulidhoo had been hit with severe coastal erosion in 2014; an episode which led to the erosion of a large portion of its beach area, prompting an emergency power outage after the extent of the erosion left the electrical wires of the Dhiraage tower exposed.

Following the conclusion of his visit to Fulidhoo, Dr. Hussain travelled to Thinadhoo were he engaged in similar discussions with the Thinadhoo Council.

The focus of the discussions was on coastal erosion and plans to establish a waste management facility on the island.

Dr. Hussain, in a previously statement, attributed the severe coastal erosion which had been affecting a number of local islands to the Indian Ocean Dipole, a climate phenomenon similar to El Niño marked by irregular oscillation of sea surface temperatures in which the western Indian Ocean becomes alternately warmer and then colder than the eastern part of the ocean.