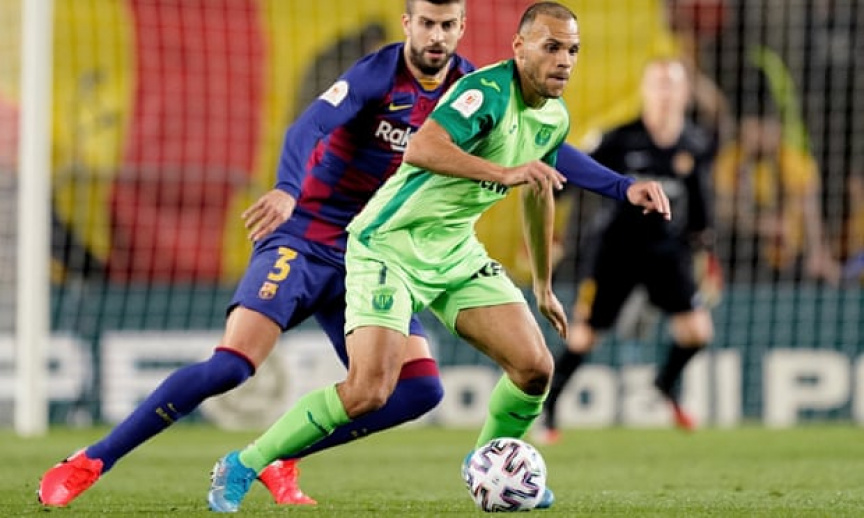 Martin Braithwaite played against Barcelona for Leganés in the Copa de Rey in January 2020. The Spanish club was rumored to sign the Danish international in February. (Photo/Soccrates Images/Getty Images)

Danish international Martin Braithwaite is set to be confirmed as Spanish giants Barcelona's latest signing on Thursday, with the LaLiga club set to pay 18 million euros for the Leganés striker.

Braithwaite had appeared to bid his Leganés team mates farewell on Wednesday morning as he prepared for a move to Barcelona where he will act as cover for the injured Luis Suárez and Ousmane Dembélé.

Uruguayan Suárez is out until at least until the end of April with a knee injury while French forward Ousmane Dembélé also injured himself after tearing a hamstring. Dembélé is ruled out for the rest of the season.

Barcelona had been given permission by LaLiga to sign an emergency striker and after combing the Spanish market, settled on Braithwaite, with the Camp Nou board set to pay the forward’s release clause on Thursday before making his signing official and presenting him at Camp Nou.

Leganés, meanwhile, cannot sign a replacement for their player despite Barça being able to do so, a regulation that has caused some consternation among Liga sides and one that will doubtless be up for review at the end of the season.